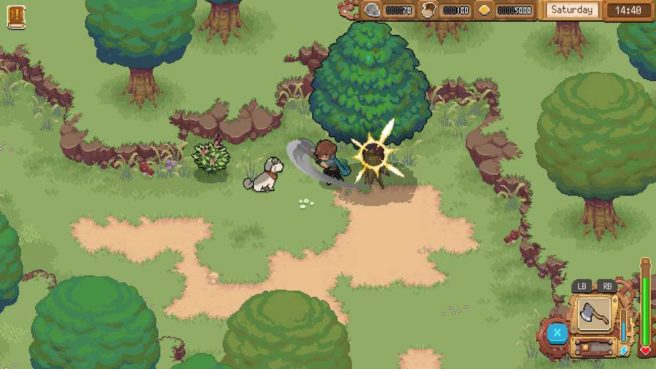 PQube and MassHive Media have announced Potion Permit, an open-ended sim RPG. The game is planned for release on Switch in 2021.

Here’s an overview of Potion Permit, along with a trailer:

Potion Permit takes you on a journey to Moonbury, a remote and peaceful town that is isolated from modern advances.

The town of Moonbury has always been wary of the advances of the outside world, preferring to rely on their traditional methods of healing. Until one day, when the Mayor’s daughter falls ill and the local Witch Doctor can do nothing to help her, they are forced to look outside their small community for help.

The Medical Association decides to send their most accomplished Chemist – you – to help cure the Mayor’s daughter, but also to convince the residents of Moonbury of the wonders of modern alchemy.

Gather ingredients with your hammer, axe, and sickle. Once you’ve decided on a potion, ointment, or salve, you must gather the required ingredients from the surrounding environment. Sometimes you won’t be able to gather the materials you need as easily as harvesting a berry bush, and you’ll need to turn your trusty tools into weapons to collect materials from the monsters prowling the nearby wilderness. Combat is in real-time and, since you’re a Chemist, you’ll be able to brew various concoctions to buff yourself or inflict status ailments on your adversaries as well as various tools to aid you.

In the downtime between treating the community’s ailments, you’ll be able to freely explore in and around Moonbury. Get to know the inhabitants a little better, take a rest in the tavern with some dice games, or go fishing to catch something for dinner. Moonbury is a delightfully charming location where time seems a little slower and life is just a little more relaxed than the big city. While the lighting will change throughout the day, with the bright sun streaking across the meadows in the morning and street lamps illuminating the town in the early evening, there are no time limits for game objectives. Players are free to go at their own pace.