Over 500 software publishers selling software on Switch, over 1,300 titles 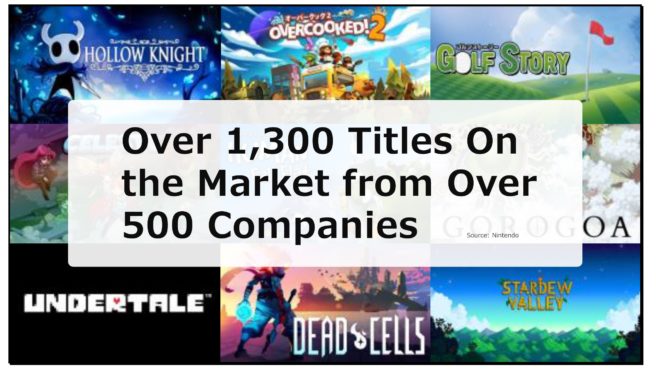 A wide variety of publishers from regions around the globe, and of all sizes including indie developers, have been on board since the release of Nintendo Switch, thanks to the early availability of a development environment. The number of publishers has further grown since then, and new titles are being released at a quickening pace, giving our consumers a continually widening selection of titles to choose from. We are also seeing increased interest via multiple media from developers in Nintendo Switch development and software sales. A hit title is naturally high-quality software in and of itself, but I also consider it to be a title that consumers and developers all appreciate to be a good fit with the “play anytime, anywhere, with anyone” concept and the quick-to-start, quick-to suspend functionality of Nintendo Switch. At the Financial Results Briefing in April 2018, we explained that more than 600 titles were available for purchase on Nintendo eShop.

As of October, there were over 500 software publishers selling software for Nintendo Switch, and worldwide more than 1,300 titles from these publishers available for purchase on Nintendo eShop. We plan to release a variety of titles from an increasing number of publishers going forward.

Note: This is the total number of titles available for purchase from the Nintendo eShop sites in the various regions of the world. The same title is not counted multiple times when it is distributed by Nintendo eShop in more than one country.

We as a company are deepening our ties with the developer community and beginning new activities in each country focused on game titles that would be difficult to introduce through conventional media channels. While widening the number of titles and genres from software publishers, we will work to create opportunities for our consumers to encounter new games.