Posted on 2 years ago by Brian in Rumors, Switch

Update: Nintendo has reverted the song title to its original name from last week. Make of that what you will.

Original: You may recall that, last week, Nintendo shared a new Smash Bros. Ultimate music. The last piece added to the site was a Galaga medley.

Fast forward a week later, and the title of that medley has been updated. No one can say why at the moment, but it may very well point to a brand new character – who could be revealed tomorrow.

END_OF_DOCUMENT_TOKEN_TO_BE_REPLACED

Posted on 2 years ago by Brian in Rumors, Switch

A new rumor is making the rounds about potential Switch titles that will be featured at E3 2018 in June. Fortnite, Dragon Ball FighterZ, and Overcooked 2 are just a few of the games highlighted.

The image above was posted on 4chan, which is where most are referencing as the rumor’s origin. However, a PR printing company and LA print shop employee may be involved here. The document could very well be a part of E3 showroom display planning.

END_OF_DOCUMENT_TOKEN_TO_BE_REPLACED

Posted on 3 years ago by Brian in News, Switch

The first official Switch bundle has been outed by Nintendo’s own official store in Russia.

Consumers will be able to choose between two options: one with gray Joy-Con and another with the neon colors (note that these pages may be inaccessible unless you’re located in Russia or use a proxy). Both come with a physical copy as opposed to a pre-installed version.

Nintendo may be announcing this Mario Kart 8 Deluxe bundle during its Nintendo Direct tonight. It’s unclear if North America will be receiving the package at this time. 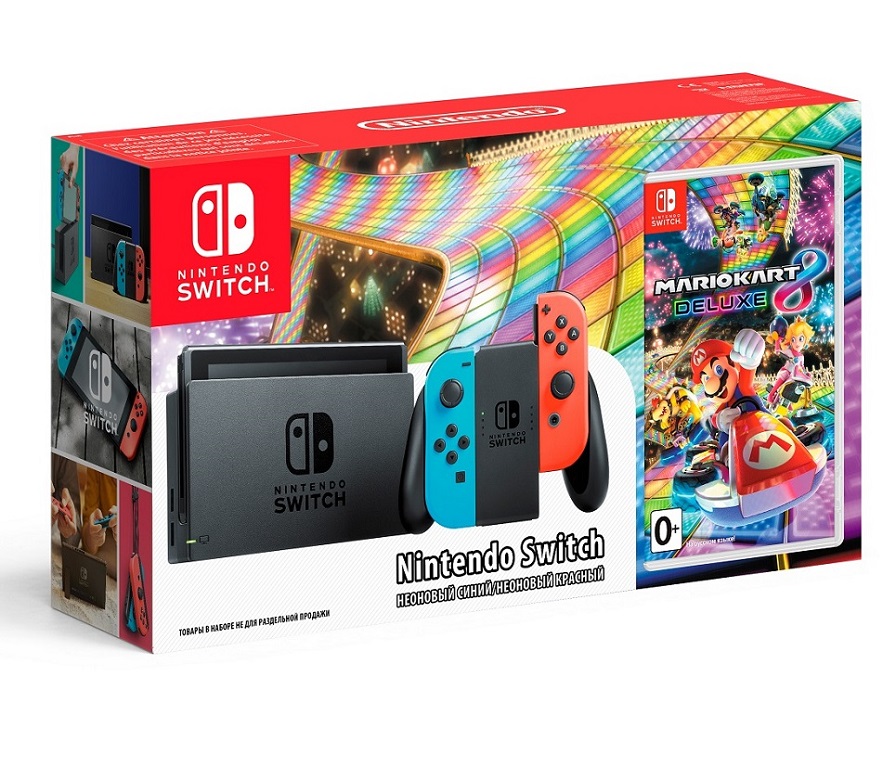 Posted on 3 years ago by Brian in News, Switch

GamesBeat recently spoke with David Young, Nintendo of America’s assistant manager of public relations. There was some rehash on things we’ve heard before, but some new comments were shared as well. Young weighed in on Switch’s tech specs, battery life (settings are unsurprisingly confirmed), online plans, and leaks.

Continue on below for a roundup of the new tidbits shared by Young. GamesBeat’s full piece can be read here.

END_OF_DOCUMENT_TOKEN_TO_BE_REPLACED

Posted on 4 years ago by Brian in 3DS, New Nintendo 3DS, Rumors, Wii U

Dutch website N1ntendo, an outlet with a fairly decent reputation, claims to have information about tomorrow’s European Nintendo Direct. There is some reason to be skeptical, and there is no guarantee that all of the items posted will be presented during tomorrow’s broadcast. That being said, now that we’re aware of Capcom’s Monster Hunter Generations trademark which was included in N1ntendo’s leak, there is a reason to share the rumored lineup (which may or may not be incomplete).

Here’s a look at what N1ntendo posted:

END_OF_DOCUMENT_TOKEN_TO_BE_REPLACED

Posted on 6 years ago by Brian in Rumors, Wii U

The image above is said to have been posted on Nintendo’s Facebook page earlier today. It was intended to act as a recap for the past week, but it appears that a new stage was included in the roundup.

We’re presented with a shot of Kirby and Pikachu in a mine cart. There’s talk that the stage could be based on either Donkey Kong or the Kirby All-Star’s The Great Cave Offensive mini-game.

The screenshot definitely looks legitimate! We’ll mark this as a rumor just to be safe. For all we know, an official “reveal” could happen this week.

Thanks to Felix for the tip.

Posted on 6 years ago by Brian in News, Wii U

TIME has outed the existence of three Nintendo games coming from Shigeru Miyamoto ahead of the company’s Digital Event today.

The first, and arguably the biggest, is Star Fox for Wii U. This is said to be “at least a year away.”

There’s also Project Giant Robot and Project Guard. Both “are still considered experimental at this point”.

Check out the following from TIME’s report:

END_OF_DOCUMENT_TOKEN_TO_BE_REPLACED

Leaks for Pokemon X/Y have been popping up all over as of late, including evolutions for all three starter Pokemon. There’s a reason for that: some retailers have already started to sell the game much to Nintendo’s disappointment.

To say that Nintendo isn’t happy would be an understatement. One leaker, who obtained an early copy, claims that the company went out of its way to fly out a representative and track down the game shop where the product was sold.

“Nintendo flew a representative out this afternoon and went to the local game shop where I picked up X. The Nintendo rep had said heads were rolling at Nintendo because of the leaks. I gave up my copy of the game to try and help keep the local game shop out of trouble and to keep my friend from losing his job.”

Posted on 9 hours ago by Brian in General Nintendo, News

Earlier this year, Ryan Hernandez pleaded guilty to federal crimes related to a Nintendo computer hacking scheme. Hernandez had leaked pre-release information about Switch, and despite a warning that followed, later hacked into multiple Nintendo servers and stole confidential information about games, consoles, and developer tools.

Today, Hernandez was sentenced to three years in prison “for federal crimes related to his computer hacking scheme and his possession of child pornography found on his digital devices”. He also agreed to pay $259,323 to Nintendo in damages. Once the sentence is up, Hernandez will carry out seven years of supervised release and will be required to register as a sex offender.

The full notice from the United States Department of Justice reads:

END_OF_DOCUMENT_TOKEN_TO_BE_REPLACED

Posted on 2 days ago by Brian in Rumors, Switch

A network data breach has revealed quite a bit of Capcom’s plans for the near-term and long-term. Much of the discussion has surrounded unannounced projects and future plans for the Ace Attorney series, but a new rumor has sprung up regarding a game due out in just a few months.

Capcom has yet to confirm which monsters will be in Monster Hunter Rise, but we may now have more of a better idea on that front. AsteriskAmpers1 has taken a closer look at some of the recent files stemming from the leak and claims to have uncovered a bunch of returning creatures as well as a few new ones.