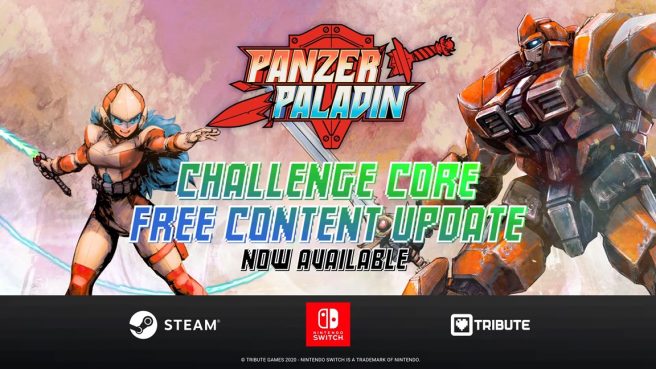 Included in the update is a new Challenge Mode with eleven rooms to test your skills, a new classic 8-bit soundtrack, and more Blacksmith weapons storage. We have additional details below, along with a trailer.

Challenge Mode
The new Challenge Mode offers 11 hardcore rooms to train and improve your skills. Pick up 7 Tribute cores in each room! Swiftly make your way through an array of pits, spikes, and enemies in record breaking time. Speedrun replay and leaderboards are also available for all new rooms.

New In-Game Classic 8-bit Soundtrack
Patrice Bourgeault is back at it with a demake of the original soundtrack. You can make your way through the game with a classic 8-bit complete soundtrack for an on-target retro experience. Choose the 8-bit soundtrack from the options menu before entering the game. Don’t worry, the Original soundtrack didn’t go anywhere, it is still available!

Blacksmith Mode Improved
You asked for it and now we have it! The Blacksmith weapon storage has been increased. Benefit from a larger armory to store your custom user-forged weapons. You can now store up to 12 custom weapons.

Don’t feel like playing with custom made weapons? We’ve now made it possible for you to only play with the base weapons made by the devs. Turn off the Blacksmith filter in the Options menu and only the 100 original weapons will drop in-game.