Party game Duel on Board reaches Switch this week 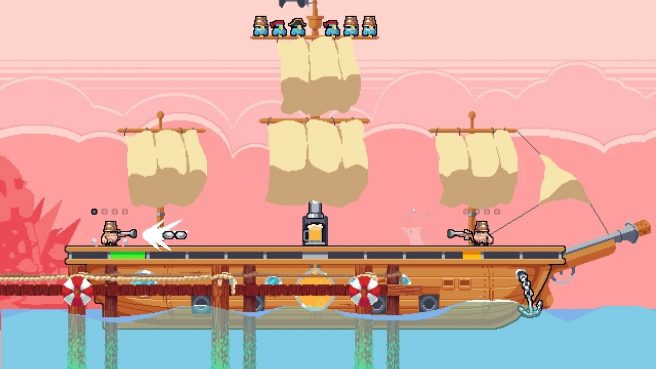 According to an eShop listing, the party game Duel on Board is making its way to Switch this week. It’s due out tomorrow, March 4.

Here’s some information about Duel on Board as well as a trailer:

Duel on Board is a 1 vs 1 local multiplayer competitive / party game where pirates fight for the precious beer while sailing the dangerous high seas.

These are the rules of the duel:

-Reach the center of the ship where the beer is placed.
-Don’t get thrown off the ship.

While sailing the dangerous high seas, you will encounter various locations with events that will change the mechanics and the rules of the game.

-Thunderstorm: Heavy storm ahead! Thunders will strike the ship, use your reflexes to avoid getting stunned by the shockwave.

-Haunted Seas: Enter a spooky dimension! A ship graveyard will be the place for epic sword duels between players and ghost pirates.

-UFO Attack: They are coming, watch out! Don’t let them abduct you while fighting the other pirate.

-Blizzard: You are now entering the South Pole and everything is starting to freeze! Be sure to dodge the bullets to avoid getting frozen.

NOT EVERYTHING IS ABOUT THE BEER!

When pirates are not dueling for the beer, they can enjoy some extracurricular activities.

-Penalties: Soccer on a pirate ship! Pirates will take turns to try to score a goal and win the championship.

-Sword Fight: Don’t become shark food! Use your reflexes to push your way through the ship and throw your opponent off the plank.

-Ping Pong: Jumping is not allowed! Become the master of Ping Pong deflecting all the balls that are coming to you.

-Cannon Dance: We are under attack! Help each other in order to survive the attack from an enemy ship.

Duel on Board will cost $7.99 on the Switch eShop. Pre-orders are now available.