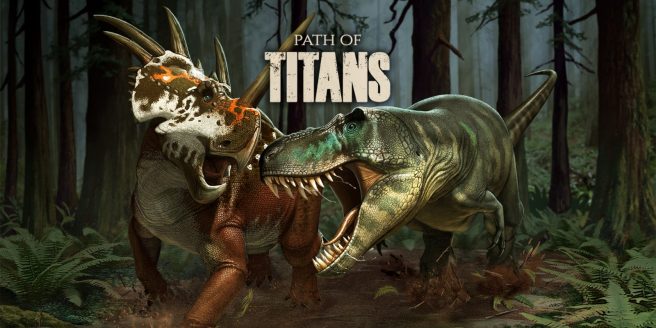 The dinosaur MMO Path of Titans just came to Switch a few days ago, and those that are curious to see how this version turned out can check out new gameplay. The video shows menus/options, the dinosaurs themselves, and actual footage.

You’ve never experienced a dinosaur adventure like this before! Path of Titans is an open-world dinosaur sandbox MMO adventure with 25+ dinosaur species.

With amazing graphics including over 100,000 variations of cosmetic skins, unique traits and skills for each dinosaur subspecies, get ready to be transported to endless adventures wherever your dinosaur imagination takes you. Explore your Jurassic Era dinosaurs as you level up species with your friends, and discover even more Community Mods’ creatures and maps available today. Survive, explore, fight and thrive PvP and PvE while ranking up your skill slots, side questing, and customizing glorious cosmetic skins through the highlands of Panjura!

Baby dinosaurs start off your adventure, learn to explore, master combat, make friends, join a herd or survive solo, hunt, fish, graze, defend resources, say just one more side quest tonight, build a home cave, start your own dinosaur family with your new baby characters or your friends’ babies, and expand your skills, traits, ingame cosmetic skins while roaming the Earth of millions of years ago!

Dinosaurs rule these lands, and now you can enter their world!

With more Official dinosaurs and Community Mods on the way, the question today… which dinosaur will you take your first steps with on the Path of Titans?

Have a look at the gameplay for Path of Titans on Switch below.