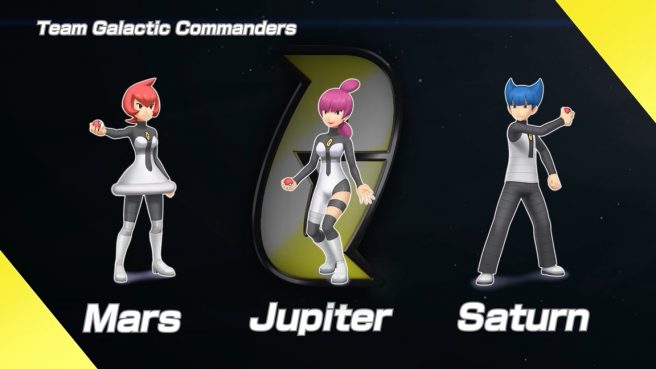 The Pokemon Company is back with new information about Pokemon Brilliant Diamond and Pokemon Shining Pearl, this time covering aspects like Team Galactic and Legendary Pokemon in the two games.

Cyrus and Weavile
A charismatic figure who rules over Team Galactic. Cyrus always speaks and acts with a calm, logical demeanor. He detests human minds and emotions, finding them defective.

Mars and Purugly
Mars is a strong-willed commander who hates to lose and has sworn loyalty to Cyrus. Her passion for Pokémon sometimes inspires powerful emotional outbursts. Her partner Pokémon is Purugly.

Jupiter and Skuntank
Jupiter has a mysterious air about her. She is certainly skilled at Pokémon battles, but she’s willing to do anything – even steal other people’s Pokémon—to achieve her goals. Her partner Pokémon is Skuntank.

Saturn and Toxicroak
Saturn is a cool and collected commander. Despite being one of the few who occasionally harbor doubts about Cyrus’s plans, Saturn is cold and dispassionate enough to carry out his orders faithfully. His partner Pokémon is Toxicroak.

Candice and Abomasnow
Gym Leader Candice of the Snowpoint City Gym uses Ice-type Pokémon, with Abomasnow heading her team. Known as the Diamond Dust Girl, she’s a passionate Trainer who really emphasizes the value of focus.

Volkner and Luxray
Gym Leader Volkner of the Sunyshore City Gym uses Electric-type Pokémon, with Luxray heading his team. He’s said to be the strongest Gym Leader in the Sinnoh region, but he’s grown bored by a lack of tough challengers, so he spends his time constantly remodeling the Gym.

Three Lakes that Represent the Sinnoh Region
Sinnoh features three lakes filled with bountiful water: Lake Acuity, Lake Verity, and Lake Valor. It is said that Legendary Pokémon slumber at the bottom of these lakes.

We have a new Pokemon Brilliant Diamond and Pokemon Shining Pearl trailer showing off Team Galactic, Legendary Pokemon, and more below.