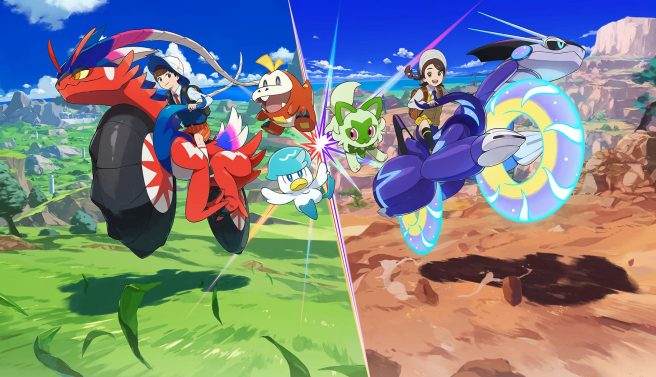 The wait is finally over for Pokemon fans as the newest games, Pokemon Scarlet and Violet, have now released worldwide on the Switch, and Nintendo have dropped a short launch trailer to celebrate the occasion.

In case you missed our previous coverage, catch up on the games with the overview below:

Catch, battle, and train Pokemon in the Paldea Region, a vast land filled with lakes, towering peaks, wastelands, small towns, and sprawling cities. There is no set path, so you can adventure freely through three grand stories. In one such story, you can challenge Pokemon Gyms in any order you desire as you aim for the Champion Rank! Explore a wide-open world at your own pace and traverse land, water, and air by riding on the form-shifting Legendary Pokemon Koraidon. Choose either Sprigatito, Fuecoco, or Quaxly, to be your first partner Pokemon before setting off on your journey through Paldea.

Pokemon in the Paldea region have the ability to Terastallize to gain special power. When a Pokemon Terastallizes, a Tera Jewel appears above its head like a crown, and the Pokémon’s body glistens like a cut gemstone. Each Pokemon has a Tera Type that remains inactive until the Pokemon Terastallizes. For example, most Eevee will have a Normal Tera Type, but some other Eevee have a Flying Tera Type! When a Terastallized Pokemon uses a move that matches its Tera Type and at least one of its original types, the boost to that move’s power will be even greater! Terastallizing holds the key to victory or defeat in battles in the Paldea region.

The Paldea Region is home to a prestigious school where people from all sorts of regions come to hone their skills against each other, be it through academics or Pokemon battles. The name of the school, its emblem, its uniforms, and other details will differ depending on whether you play Pokemon Scarlet or Pokemon Violet. Take classes with unique teachers who will show you what they know about battling, Pokemon biology, and more. Embark on an independent study called the Treasure Hunt to gain new experiences, meet new people, and find your very own treasure.

New Pokémon to discover, a brand-new region to explore and so much more!

Pokemon Scarlet and Violet are available now on Switch.