Over the past few months, gaming enthusiasts have come to understand that casual games are a dominant force in the market and that these types of games have the staying power that is needed in the video gaming industry. The incontrovertible success of casual games – much to the dismay of longtime videogame fans – has caused a heated debate. Will the videogame market eventually become dominated only with games that a player can pick up and play? As Zelda and Mario change from hardcore to “bridge” games, will they eventually be tweaked to the point at which no challenge will be presented to the player at all? And finally, as Japan continues to ignore traditional games such as Metroid, will developers try to cash in on simple titles?

Brain Age, Wii Sports, Wii Fit. These are titles that appear to be more “mainstream” and, therefore, can draw in a significant number of videogame newcomers. Professor Layton is another of these casual games, and, unsurprisingly, it has done remarkably well in the Japanese market. In fact, two games in the series have already been released in The Land of the Rising Sun, and one more is in development. As much as videogame loyalists appreciate hardcore games, Professor Layton deserves an equal chance, as it is a charming puzzle game, which suffers only from a few, but noticeable flaws.

The game begins with Professor Layton and his protégée, Luke, traveling to the village of St. Mystere after receiving a request to investigate a certain situation. Following the death of Baron Augustus Rheinhold, an extremely wealthy man, a mystery erupts. At the reading of Rheinhold’s will, a “Golden Apple” is mentioned. The person who discovers its hidden location will reap a huge reward – Rheinhold’s entire estate. The Golden Apple is an enigmatic item. No one quite knows exactly what this object is and ultimately, no one is able to find it. Professor Layton, in the meantime, believes that the Golden Apple possesses an underlying connection to a grander mystery. As a result, Professor Layton and Luke head off to St. Mystere, determined to unravel the entire mystery. 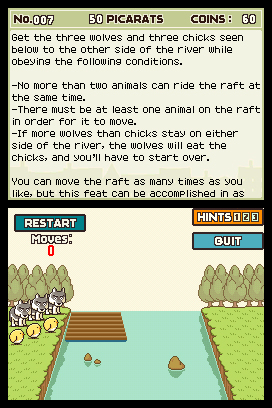 Professor Layton and the Curious Village is best described as a point-and-click puzzle adventure. Most of the time, you will be exploring the many European-like settings on the touch screen in search of hidden puzzles and hint coins that will aid you in your puzzle-solving bouts. The most surprising aspect about the whole game is how well the puzzles are interlaced into the storyline. Most developers usually follow a safe approach, thus it is both a surprise and a delight to see a game not falling victim to conformity. A tap of the stylus is needed to travel from place to place and to converse with the locals of St. Mystere – whom, by the way, always have some puzzle in store for you to attempt to solve. Only in a handful of situations will you be forced to solve certain puzzles in order to progress. This is probably the best approach, as some may find unraveling all of the puzzles in the game to be a bit challenging.

In terms of the actual puzzles, they vary in both difficulty and type. Some puzzles, especially early on, are rather easy to solve, but others will really test your thinking skills. The puzzles range from trigonometric brainteasers to simple logic challenges. If you happen to find yourself stuck on a particular puzzle, you can use the many hint coins scattered throughout St. Mystere to assist you. Each puzzle has three available hints, and by the time you unlock the third, the last hint will generally give away the solution to the riddle. If you complete a puzzle on the first try, the maximum amount of Picarats will be earned. This constitutes the scoring system of the game, so to speak. Although they do not hold monetary value, the number of Picarats that can be earned is good indication of the puzzle’s degree of difficulty. When an incorrect answer is entered, a few Picarats are deducted from the total number that can be earned from a specific puzzle. However, this only occurs twice, on average.

One regrettable downside of the game is its overall difficulty. For many of the puzzles, there are only a limited number of choices/possibilities available for its solution. Because of this, a player may be inclined to simply power down the DS and restart without suffering any repercussions and, as a result, identify before beginning the game once again, which answers should not be entered. In contrast, some may even feel that cheating is not worthwhile, as the downgrade in Picarats for an incorrect answer does not have much impact on how the rest of the game plays out. It might have been wise to add a more important value to Picarats and fix the possibility of cheating. 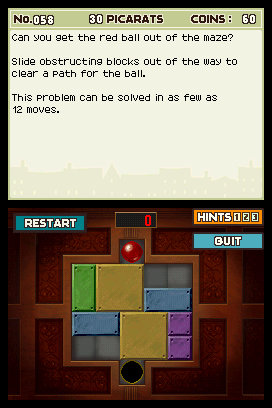 Even though Professor Layton does not feature a great deal of animation, the style of the game is aesthetically pleasing. The European-style setting of the game truly seems real, invoking the impression that the fictional St. Mystere is a village that actually may be visited. In addition, the cut-scene movies that are sprinkled throughout the game are very similar to some of the current cartoons that children are viewing on television daily. It is a delight to view these short, but enjoyable clips, as they not only feature a few comical moments, but more importantly, they help to expand the story.

Also pleasing, yet not often used, is the believable voice acting the game employs. Voices can be heard in nearly all of the cut-scenes, and sometimes during typical gameplay. However, the experience would have been more interactive with additional voices. Nonetheless, voice acting on the DS is praiseworthy and it is hoped that future titles for the handheld will a a similar idea.

Professor Layton and the Curious Village will take a few hours to complete. Weekly puzzles have been available for download for the past month, but players will, most likely, not return to puzzles already solved. Professor Layton has all of the markings of a great game and fortunately, it is suitable for both the hardcore and pick-up-and-play audiences. The game manages to weave in impressive, subtle beauty with an intricate storyline and gameplay to match. Knowing that additional Professor Layton titles will inevitably release in America, there is little doubt that the developers will continue to build upon the strong foundation that has already been laid with the Professor Layton series.