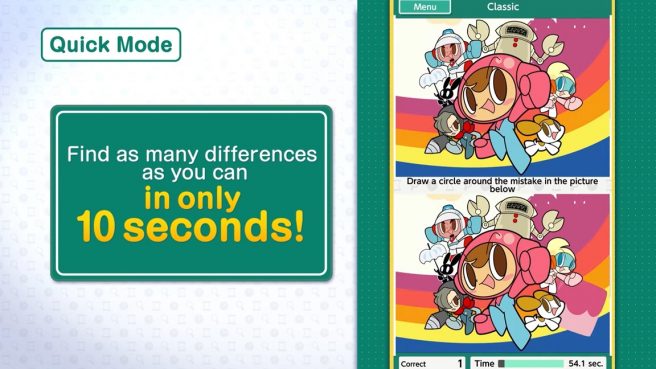 Bandai Namco has just come out with a bit of an unconventional Switch game titled QuickSpot.

Japan originally received it last April. It’s a spot the difference puzzle game that “stimulates the brain and trains the eyes with fun games where players try to find mistakes, fit puzzle pieces, and uncover hidden objects in a gallery of creative images.” Other features include new game types, a new Party Mode, and various new illustrations.

QuickSpot contains 20 different games and over 10,000 questions and puzzles “designed to stimulate the right brain, the center of creativity.” There are a few different modes such as Quick Mode in which players partake in ten-second speed rounds, Endless Mode that provides training and brain refreshing exercises with no time limit, and Party Mode in which up to four players can compete to see who can score the most points. Hundreds of illustrations are available, including nods to some of the most popular Bandai Namco games – like Mr. Driller pictured above.

Take a look at a trailer showing off the game in action below.

QuickSpot can be purchased digitally for Switch as an eShop download. You can pick it up for $19.99.