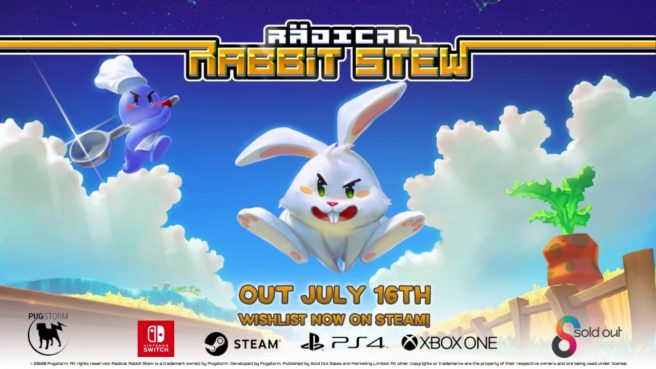 Here’s an overview with additional information:

● Scintillating Puzzles – Sink your teeth into puzzles and challenges with a range of rabbit foes, and acquire gameplay-altering spoons that keep puzzles fresh and fun.

● Super-Sized Boss Fights – Face off against unique bosses, each requiring different tactics to conquer. Whether it’s using enemy rabbits as ammunition or dodging incoming trains and smacking the drivers out, be prepared to think creatively to defeat each one.

● Sizzling Pick-Up-And-Play Action – Enjoy a mixture of expansive, side-scrolling levels and shorter, single-screen layouts, and have the freedom to hop in for bite-sized sessions or defeat those rascally rabbits entire worlds at a time.

● Seasoned Couch Multiplayer – Hop onto the couch to face off against friends in a competitive yet light-hearted multiplayer mode.

For those attending PAX East 2020 next week, Radical Rabbit Stew will be playable on Switch at booth #30071 between February 27 and March 1.