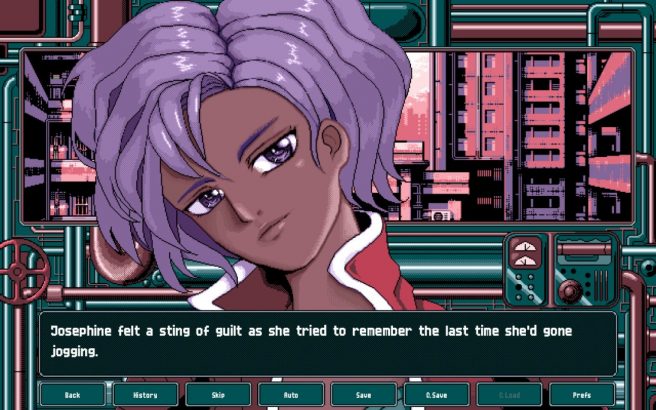 Top Hat Studios, in collaboration with developer Salmon Snake, announced today that it will soon be putting Vengeful Heart on Switch. It will release in late March.

Vengeful Heart is a retro futuristic visual novel that you playing as Josephine Lace, who goes on a mission to take down “the system that ruined her and starts looking for more broken hearts to achieve her promised revenge”. More information can be found below.

In Vengeful Heart you take the role of Josephine Lace, a young hydraulic engineer living in a world where water has become as scarce as liquid gold, and the poor masses are forced to cope with a permanent shortage. Josephine is eager to climb the corporate ladder to improve her living conditions, but a bad twist of fate slams her against the cold, muddy basement of the homeless life. Soon, she becomes hellbent on taking down the system that ruined her and starts looking for more broken hearts to achieve her promised revenge. Will this crazy plan help Josephine get the redemption she longs for?

Experience a unique story rich in social commentary with both grim and humoristic undertones, widely inspired by anime series/movies from the late 80s such as Bubblegum Crisis and Akira — any resemblance to real life is purely coincidental.

Face the consequences of your decisions in a story that branches with widely different outcomes.

Destroy the oligarchy in style: our personal colorful aesthetic will remind you of PC-98. Experience a post-industrial future when the thing we take most for granted – water – becomes liquid gold..

Listen to a wonderfully immersive synthwave soundtrack that will make you nostalgic for a time that never was.

And here’s a trailer for Vengeful Heart:

Vengeful Heart will be sold digitally for Switch as an eShop download. Pricing is set at $10 / €9.99.