If you’re in search of excellently executed ancillaries that push the puzzle genre past its minimally-accepted bounds, you’ll have to wait until Jupiter Corporation (Picross DS) gets the wigglin’ for T-Jigglin’.

Tangram game, perfect for boy and son, finally has a representative on the 3DS eShop! The ancient Chinese puzzler with seemingly infinite (though absolutely finite) configurations composed from the same eight blocks mirrors LEGO not only in open-endedness via face-value simplicity and accessibility, but as a developmental catalyst for pattern recognition and critical thinking in little children. With the glut of quality time-wasting and brain-exercising works available not only amongst the eShop, but the collaborative Internet as a whole, is the jungle-themed Tangram Style worthy of a place in your digital collection? Does it manage to power past the replacement-level iterative puzzler black hole problem that oh-so many no-name puzzle games fail to conquer?

While Tangram Style certainly passes the base litmus test as a fundamental tangram simulator, too many bush-league problems mar what should have been an easy game to push through the development process. Tangram Style does not indeed exceed the bounds of the aforementioned black hole, and should only be purchased by T-Gram aficionados in search of familiarity– not puzzleheads in search of another brainy rush. 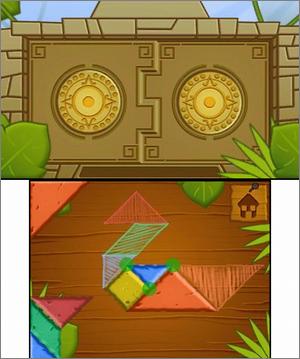 Whenever an individual interpretation is taken upon a universally-known archetype, solid foundational gameplay is implicit and mandatory; individual voice can certainly shine through on various nuances here and there, but bare tactile function need not be thought about beyond the bound of muscle memory; the developer must do a good job to expand upon the infinitesimals between expected bounds to craft something truly noteworthy.

While the creators of Tangram Style made an excellent choice to utilize the free-feeling touch screen to move and contort Tans on the bottom screen, a few fundamental control problems arose that cut off any notion of latent distinguishability. Chiefly, when placing a particular Tan at times, a bit of aftertaste inertia would slightly push something you just placed a little bit to the right or left, causing major frustration when you’re finishing a puzzle; a lot of Tan-jiggling would occur in hopes of spurring the computer to realize you’ve placed all of the pieces correctly within the outline, which felt akin to trying to turn the lock on a door with a sword.

In addition, while pieces thankfully don’t act as an extreme tell by locking once presumably correctly placed, an option to lock a Tan in so that accidental movement of previously-placed Tans would have been just exquisite. Such an absence, though not necessarily concretely folly, is emblematic of the lack of a developmental masterstroke touch contemporary puzzle games such as Picross DS and The Layton Professor possess within their mitochondria. 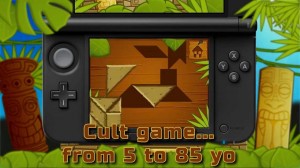 Though content is aplenty within the six-hundred given puzzles and four modes— the guilty pleasure “Child” mode, where the outlines for the pieces are given within the overarching silhouette; “Classic” mode, which is the standard for the game; “One Touch” mode, where you can’t change the placement of a previous piece once you’ve moved onto the next Tan; and “Challenge” mode, where you’re forced to solve a set number of Tangrams in a given time— a sense of emptiness till pervades Tangram Style. For one, there is no linear progression in difficulty; levels are jumbled about, and although you have to beat a certain amount of puzzles to unlock a new page, it all feels very arbitrary.

While the two creative spins on the classic formula attempt to add a bit of variety to the experience (and succeed to a decent degree), fundamental flaws still ever-present in the idiosyncrasies of control keep immersion gleaned from strategic innovation from ever brimming; the frustration from tile inertia and subsequent T-Jigglin’ is exacerbated when being timed in Challenge mode, while the fact that Tans sometimes spawn over a portion of the overarching adumbration can make for some unintentionally frustrating moments in One Touch mode. The meretricious jungle theme and respective background ambient noise all coalesce with the aforementioned, beta-esque oversights to create a product worthy of the 3DS eShop, but not of merit.

The bottom line…?
Tan fans: if you really feel like Tanning on the go, for $6.99, Tangram Style will certainly provide enough content and good-enough touch control to warrant checking out. However, if you’re in search of excellently executed ancillaries that push the genre past its minimally accepted bounds, you’ll have to wait until Jupiter Corporation (Picross DS) gets the wigglin’ for T-Jigglin’.

… the specific nuances inherent in Tangram not found in other ubiquitous puzzle standards (Sudoku, Crossword, Picross, etc,) appeal to you, and you’re wanting a good chunk of gameplay

… you’re looking for something grander than a pedestrian, slightly overpriced iteration of the Song Dynasty classic.