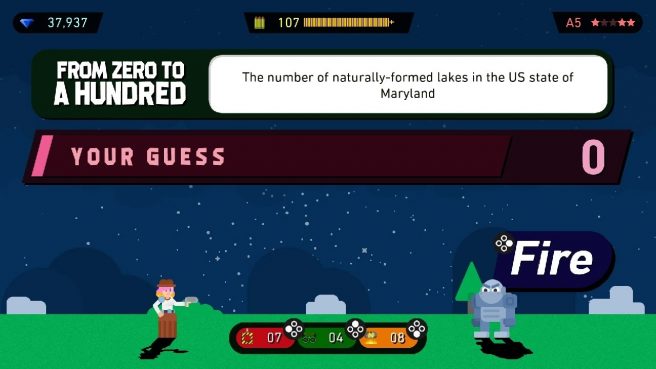 Chequered Ink’s trivia game Revolver and Co will appear on Switch next week, the developer has announced. A release is planned for July 2.

Here’s some information about the title as well as a trailer:

It’s 2038, and a late maniacal inventor has left behind a legacy of madness – coordinates to an island full of wealthy robots, a gun that asks questions, and a widow that’s hired you to answer them.

As Izzy Buspec, the newest recruit to Randco, take charge of their patented revolver as you explore the densely packed biomes of Corvynnia, bringing down hordes of docile robots in a money-making adventure. Every time you fire, you’ll have to answer one of over 2,000 trivia questions with answers based on numbers, percentages, geography, dates, and more – the further you are from the actual answer, the more of its own ammunition the revolver will discharge. If you run out, it’s back to Randco HQ to reload!

Revolver and Co features 105 story levels across 7 unique worlds and 12 question themes which will test you on a wide range of subjects, tied together with humorous debriefings between Izzy and her maniacal boss before the start of each mission.

Or if you’re looking for more of a challenge, have a go at one of the Endless challenges, which pits you against a barrage of questions until you finally succumb to an empty revolver chamber. You can even unlock more Endless challenges by completing the story levels, including a gruelling hour-long session where the only thing you have to lose is time.