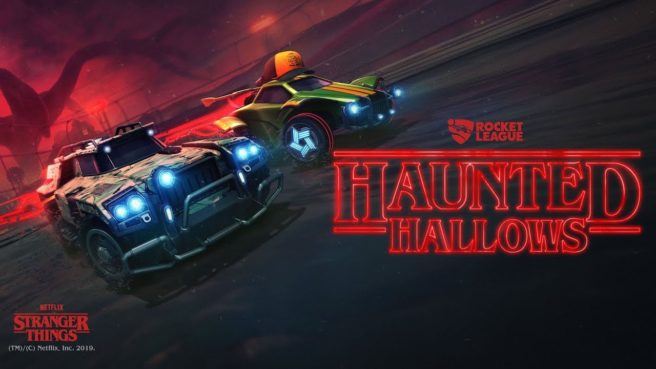 A Stranger Things collaboration recently came to Dead by Daylight, but that’s not the only big game partnering with the Netflix series. Starting October 14, Stranger Things is invading Haunted Allows with a themed stages and items.

Farmstead (The Upside Down) Arena

And some additional information:

Rocket League is entering The Upside Down, and things have gotten… stranger. Netflix’s award-winning Original Series, Stranger Things, has invaded this year’s Haunted Hallows, and The Mind Flayer is preparing to make this a truly unforgettable event starting Monday, October 14.

This Halloween, all roads lead to Farmstead (The Upside Down). This terrifying take on the once-whimsical Farmstead Arena is watched over by the maddening Mind Flayer, so make sure to look after your teammates.

If you’re able to make it out of Farmstead with full control of your own Battle-Car, you’ll earn Candy Corn to be used in the Haunted Hallows Event Store. The store will have autumn-inspired items, plus some top secret wares developed by the Hawkins National Laboratory that will turn your Battle-Car creations up to Eleven. Take a sneak peak at some of the items below.

Haunted Hallows featuring Stranger Things will go live following the October Update on October 14 and will run until November 11. Similar to previous in-game Events, there will be a three-day Redemption Period where you can use your extra Candy Corn in the Event Store. We’ll see you in the Upside Down!