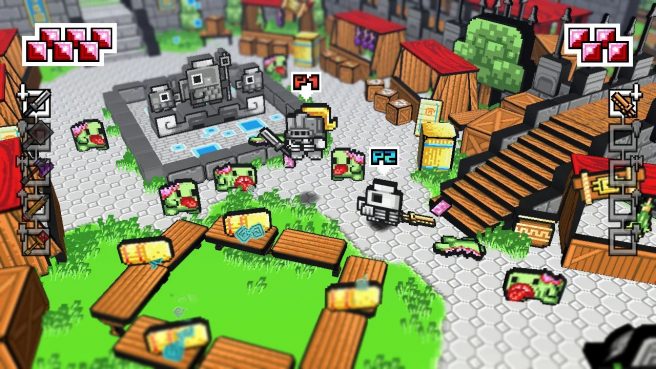 You may recall that Skellboy launched on Switch last January. Developer Umaiki Games has continued to work on the game since then, and with all of content and changes put into the title, it’s turning into a brand new release.

Usually we’d see something like this incorporated into a patch. However, Fabraz says that the update is so big that a brand new release made more sense.

The game has been fundamentally reworked from the ground up. Not only for gameplay & progression purposes, but also to dramatically improve performance on the Switch. Because of this, if this were a patch it would have more than doubled the original’s game size which we thought was not fair.

A patch wouldn’t have done Refractured justice either. This bad boy deserves a second look with the enormous amount of new content it holds! Umaiki Games has been working day and night since launch to make this happen! (That was a year ago, yeesh!!)

– Local two player co-op mode! You can play through the ENTIRE game together, start to finish!
– A brand new randomized dungeon! It’s brutally difficult and comes with new items, hazards, enemies, bosses and mechanics!
– Refractured Mode! Finished the main story but can’t get enough? Use that blaze mace to discover an alternate reality where things went very, very wrong. Consider this like a brand new second campaign!
– Dozens and dozens of new items, body parts, weapons and more with a ton of novel effects!
– A brand new map as well as new areas to discover entirely!
– Spanish language option!
– More sound effects, more music, more everything.

Skellboy Refractured officially launches on June 4. If you own the original game, it will be entirely free. For everyone else, it’ll cost $20, though pre-orders are currently down to $16 on the eShop.