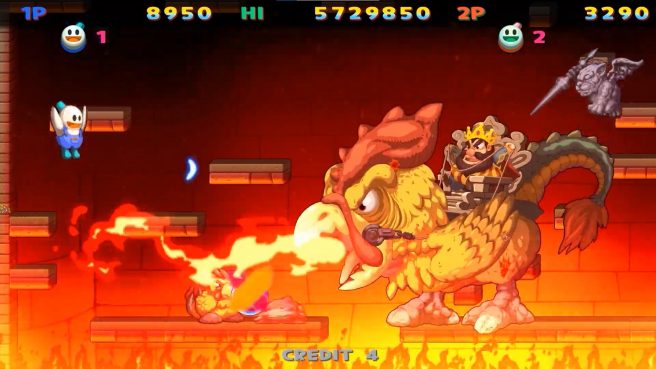 Publisher Daewon Lab Media and developer CRT Games have announced an official release date for Snow Bros. Special. The game is scheduled to launch on Switch May 19, 2022.

Snow Bros. Special is a revival of the original arcade game Snow Bros, made by Toaplan back in 1990. It’s being produced with the goal of replicating the feel of the arcade game, while improving on the older mechanics and maintaining the cute aesthetic of the original.

Check out an overview for Snow Bros. Special below the break.

Snow Bros. is a classic platform game that was first released as an arcade game in 1990 by Toaplan, a Japanese development studio that was mainly famous for their shoot ’em up games. The critically acclaimed Snow Bros. later released for several consoles and home computers. Being well-liked by players, Snow Bros. spawned a sequel on arcade. Snow Bros. gained cult status as a sought-after retro game after having been dormant since the 90s.

30 years later it’s time for the heroes Nick and Tom to return in a modern interpretation with the title Snow Bros. Special coming to Switch later in 2022. Snow Bros. Special has inherited the cute design and the feeling from the original arcade version, but has been upgraded to make it even more fun. The game can be played by two players at the same time.

New in Snow Bros. Special is the “Monster Challenge” mode in which you play as the monsters. Each monster has its own special moves and controls which will change how you play the game. Monster Challenge is included with the physical version and available as a separate downloadable content for the download version.

One day, the peaceful country of Snow Land is suddenly invaded by King Artich of Kingdom Hotteda Kingdom! The twin princes of Snow Land, Nick and Tom, try to stop him, but in turn are transformed into snowmen by the curse of King Artich. The twin princesses, Puripuri and Puchipuchi are abducted and Snow Land began melting down and disappearing. Nick and Tom start their long journey to regain peace in Snow Land, rescue the princesses and lift the curse.

Here is the new trailer for Snow Bros. Special.

Snow Bros. Special will be releasing both physically and digitally via the eShop. The digital will cost $19.99 while the physical package version will cost $29.99 and include DLC on the cart.