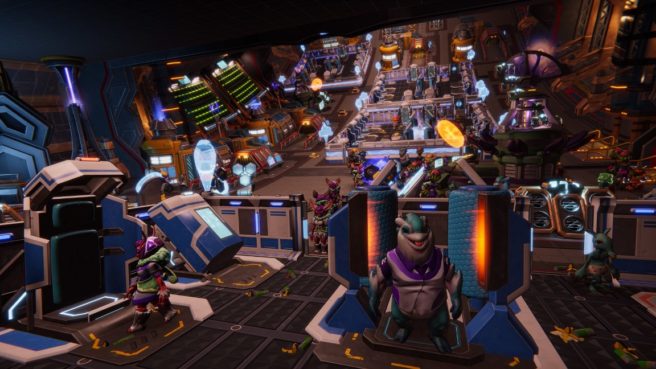 Publisher Kalypso Media and developer Realmforge Studios have announced that the construction management sim Spacebase Startopia will be releasing on Switch in 2021. A more specific date will follow later on.

Here’s the latest information about the game:

Spacebase Startopia is a galactic new take on a fan-favourite space base-management game set in…well, space! This vibrant and often absurd universe offers players an exciting blend of city building and base-management, with a flash of RTS skirmishes.

By breathing life back into a true classic, developer Realmforge Studios strikes a careful balance between nostalgia and innovation in its reimagining of the popular strategy game, which revolves around a donut-shaped space station filled to the brim with a colorful cast of aliens managed by their tireless commander (that’s you, human).

In Spacebase Startopia, players will carve out their own little space in the universe, ready to become a galactic utopia – if your management skills are up to the task. With three different game modes and a vast amount of management decisions to be made under the watchful eye of the VAL, the station’s sardonic AI, there’s plenty of in-depth gameplay waiting for new and seasoned players alike. But beware of invading Space Pirates, who will do their best to ruin your carefully laid plans!

Spacebase Startopia offers a constant stream of challenging and addictive objectives to be completed, served up with the distinctive humour and sharp writing that developer Realmforge Studios is known for. Just ask VAL if you don’t believe us! But, uh – ask nicely.

– Singleplayer campaign with 10 fully voiced single player missions
– Individually configurable sandbox mode
– Competitive and a cooperative multiplayer for up to 4 players
– Build 30+ rooms across three very different decks to offer everything that the visiting aliens could wish for
– Manage a melting pot of different alien races, each with their own individual – and sometimes contradictory – needs and desires
– Produce and trade resources to turn a profit, while running sabotage missions against your competitors

A new video for Spacebase Startopia debuted today that answers seven key questions and contains a bit of new gameplay. We have that below.