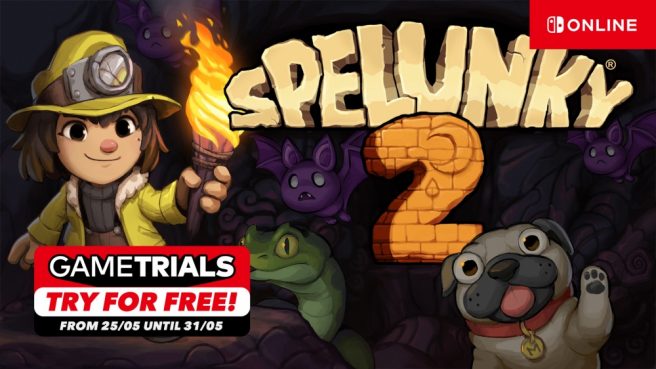 Spelunky 2 will be offered as the next Game Trial for Nintendo Switch Online in Europe, it’s been announced.

Like all Game Trials, those with an active subscription can play through the entire game at no extra cost. Save data can also be carried over to the full version.

Meet the next generation of explorers as they find themselves on the Moon, searching for treasure and missing family. Spelunky 2 builds upon the unique, randomized challenges that made the original a classic, offering a huge adventure designed to satisfy players old and new. Explore the game alone, play locally with up to four players, or, for the first time, join up with friends online to unravel its mysteries together (or battle it out in competitive Arena modes).

Spelunky 2’s world is even denser than the one in the original game, offering more areas, characters, traps, and items, as well as new ways to interact with them (and for them to interact with each other). The world has expanded in other ways, too, with branching paths and multi-layered levels adding a third dimension to the classic 2d platforming gameplay.

The Spelunky 2 Nintendo Switch Online Game Trial will be active starting on May 25, 2022. Currently it’s only been announced for Europe, but we’ll let you know if a similar announcement is made for North America.