Posted on December 11, 2019 by Brian(@NE_Brian) in General Nintendo, News, Switch 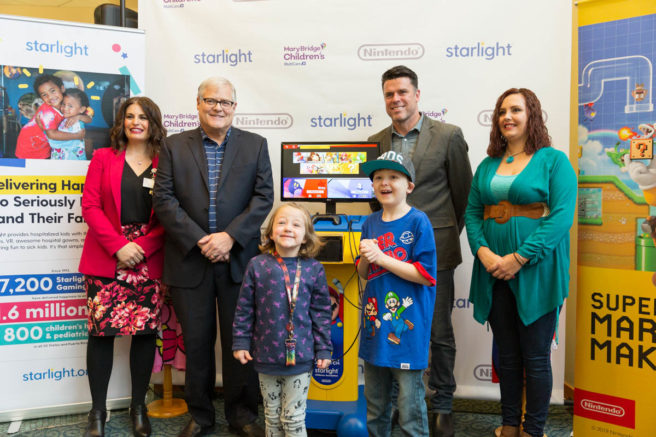 Starlight Children’s Foundation and Nintendo of America have had an ongoing partnership since 1992. The two companies have delivered over 7,200 Starlight Gaming stations to hundreds of hospitals across North America for an estimated 11.6 million seriously ill children. Previous Nintendo consoles have been represented, including the SNES, Nintendo 64, Nintendo GameCube, Wii, and Wii U systems.

Here’s some information about the Switch gaming station as well as the program as the whole:

The new Starlight Gaming station features the popular Nintendo Switch system and is specially designed and manufactured by Nintendo of America for use in a hospital setting. The device can be completely cleaned with disinfectant to meet a hospital’s strict safety infection protocols and includes a mounted playback monitor that can roll anywhere in a hospital so children can enjoy some of their favorite Nintendo video games from the comfort of their own hospital beds or in a playroom with a group of other children.

Doctors, nurses, clinicians, and child life specialists are able to use a single Starlight Gaming station in a variety of settings, from entertaining children during a relative’s visit to the emergency room, to distracting kids during an otherwise painful medical treatment, to giving kids something fun to do during long periods of isolation or with a group of other kids, or helping them to relax and feel comfortable when communicating with caregivers about their diagnosis.

We also have a few comments from those involved:

“We’re incredibly excited to unveil the new Starlight Nintendo Switch gaming station and celebrate our 27-year partnership with Nintendo of America. Over the years, Starlight Gaming stations have provided millions of seriously ill children with the healing power of play, entertainment, socialization, and emotional support, and have helped to normalize an otherwise scary situation or setting for families. We’re so grateful to Nintendo and their employees for such a long and continuing partnership fueled by innovation, impact, and generous support.” – Starlight CEO Adam Garone

“It’s been our pleasure to work with Starlight and observe them bringing happiness to kids when they need it the most. As with everything we do, we hope the new Starlight Nintendo Switch gaming stations will put smiles on the faces of children and their families.” – Don James, Nintendo of America’s Executive Vice President of Operations

“The gaming stations are important distraction tools that normalize the health care environment and help kids through difficult experiences. They provide choices for kids, motivate them, and give them the opportunity to have fun when it is needed most.” – Julie Hertzog, CCLS, child life supervisor at Mary Bridge

Find some photos from the unveiling event below.