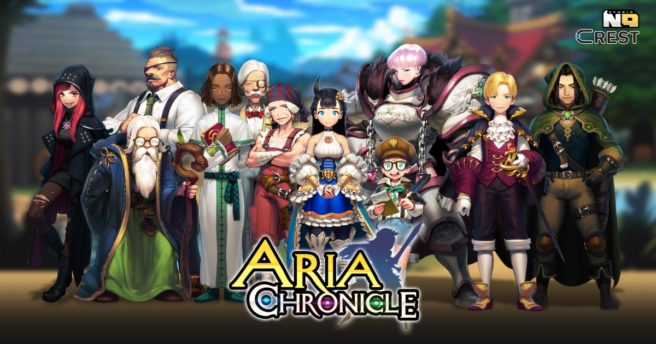 The strategic RPG Aria Chronicle is on the way to Switch, Crest and Studio N9 have announced. It will launch this winter on Nintendo’s console.

Here’s an extensive overview of Aria Chronicle, along with a trailer:

[Aria Chronicle World View]
A princess of the Tamageria kingdom, Aria, made her pilgrimage with Paladin Tila and secretary Gerom to the edge of village, Latebra, and she noticed Lord Tyler was missing when she gets there, and Aria and her companies found out that mysterious organization, Cult was involved in this case and fight with the denomination.

In the middle of this journey, you become realizing the identity of the elders in Latebra with the truth in the past and the power hidden in Aria. Let’s explore this exciting story!

[Unique Characters and Monsters]
Unlike her innocent appearance, the heroine, Aria is a princess with a firm, righteous will. Aria’s aide, Tila, a female paladin, has a tall, solid body equipped with a thick, strong armor.

Their companion, Gerom is a mischievous young clerk – there are unique, distinctive individuals in the game.
The monsters in Dungeon are also made up of unique designs. Sometimes they look weak but have their own lethal moves,
so the catch-up elements for players are distributed everywhere.

[Deep Strategy System with Flexibility]
The game offers flexibility, and it will be challenging for players to predict what lies ahead of them while playing. The basic structure of the game is that Aria parties with heroes, who have more than a dozen types of skills and roll the attacks to dungeons, but it has a highly free system, which allows herself to choose 14 distinct occupations and even make different skill trees to create her own heroes.

Dungeons are also created randomly, therefore, you have to explore the map anew every time you go through a mission.

In combat, strategic thinking is needed to enable your colleagues to exercise their combat power properly,
such as the case of letting the hero alone being in a coma, following death, or the loss of his ability as degraded by his mission, or the departure of the battle as he pleases.

The natural fact, which humans get tired and be hurt as they continue to fight over and over, is well-reflected in this game so that players can enjoy real battle!

Aria Chronicle makes you submerge in the storyline, with the full, rich expression of animated graphics and characters!

For those who want to enjoy turn-based RPGs properly, or experience all the entertainment elements including high quality stories, monomyths, action-packed battles, adventures, and suspense, please give yourself a try on Aria Chronicle, the game that makes you feel excited just by hearing about it!

Try this turn-based strategic role-playing game!
Find yourself exploring a small village in the countryside, where you can experience the great story and the hidden truth it has!