Suda51 and Swery collaborating on new horror project, may end up on Switch 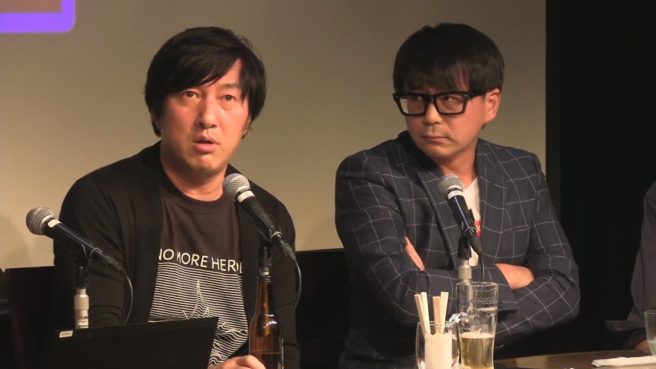 During a live stream hosted by IGN Japan today, No More Heroes creator Suda51 and Deadly Premonition director Swery stopped by to announce a joint horror project. Though much of the finer points have yet to be settled, it sounds like Switch is a realistic possibility for what the game ends up being.

Here’s a summary of information shared during the stream:

– Collaboration began as the two were originally going to make a game for PSVR together, but was cancelled
– In 2018, they decided to move forward on a new project together
– Each time they wanted to partner together and talked, they got drunk and forget it
– Doing today’s event is intended to really get the project settled
– Horror game
– Tentatively known as Hotel Barcelona
– More like an indie game instead of a AAA title
– Talked with Devolver Digital to publish, who gave them a budget of around $1 million
– Some of the details are in the air right now
– They want to make something like, easy, and simple to play; mentioned platforms like Switch, mobile, Stadia
– Could have different rooms that represents different people, dimensions, look at what happened in a period of time
– Swery mentioned timelines as being key to this game
– Swery isn’t into pure horror too much, but more into suspense and nervousness, lingering sense of creepiness
– Since Suda51 likes splatter horror, he said maybe the second half could be a splatterfest that comes out of nowhere
– They think it’d be a cool idea for fans to get involved by having them share pictures on social media to be in the game
– To reiterate, there is still much that hasn’t been finalized, including the actual location of where the game could take place (Barcelona itself isn’t finalized)
– Swery wants to see a character that is 100% evil and doesn’t have a shred of good in them
– He threw out an idea of controlling this character and you’re forced to do things that you as the player don’t want to do
– All of your options are how you’re going to kill this person; you don’t want to do this, but the character does
– Suda51 likes the idea as well
– Also on characters, Suda51 said there are people staying at the hotel and employees
– Also have someone who’s killing the various people at the hotel; this could be a person or not a person like a ghost or shapeless form
– Swery threw out side-scrolling as the type of gameplay system it will be