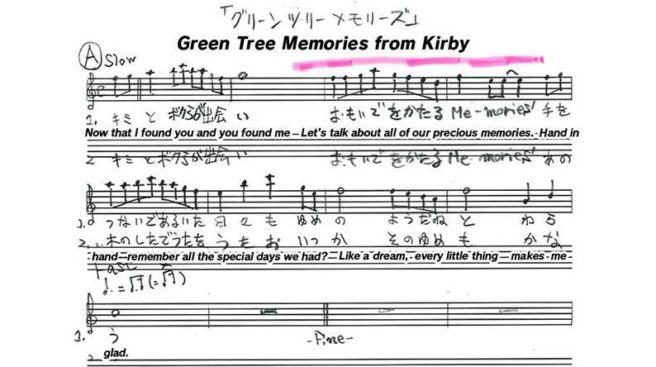 Super Kirby Clash director Yumi Todo has shared some new information about the Switch game, specifically relating to the ending song. Todo actually shared the first draft of the score and lyrics while also discussing how HAL Laboratory approached the music.

Hello! This is Yumi Todo of HAL Laboratory, Director of Super Kirby Clash.

This time round, I’d like to talk a little about the ending song.

I bet a lot of you are surprised to hear me call it a song. But it’s true! The theme that plays over the credits for this game has some singing in it. It’s called ‘Green Tree Memories from Kirby’!

The song was written by staff from HAL Laboratory. The lyrics came from General Director Shinya Kumazaki, while the melody was composed by Tadashi Ikegami, who in recent times has mainly worked in management, but has been in charge of sound design for Kirby since the early days of the series.

In the image you can see the first draft of the score and lyrics!

From this, we carefully went over the melody and lyrics, put in requests for a translation and a musical arrangement and finished putting the song together.

I think it ended up being a song full of the cuteness and attitude you’d expect from Kirby – just humming it is sure to put you in a good mood. You can hear the ending song at any point in the game by going to the options screen and viewing the credits, so by all means, listen to it as many times as you like.

If you decide to sing along too, I’d be very happy!

Super Kirby Clash can be found on the Switch eShop. It originally debuted last September.