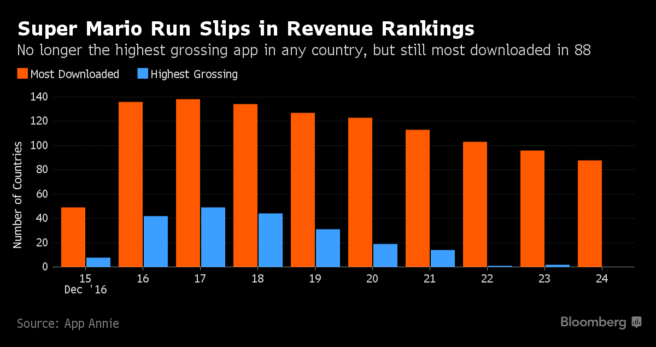 Bloomberg reports, based on data from App Annie, that Super Mario Run is no longer the highest-grossing iOS app in any country as of December 24. That’s a big turnaround from the previous week, when it was the most profitable app in 49 territories.

It’s not all bad news for Super Mario Run, however. While it’s dipped from 138 countries on December 17 as the top free download, it remains at that spot in 88 nations.

Super Mario Run features a very different pricing structure from another Nintendo-related mobile title, Pokemon GO. Niantic’s game is entirely free-to-play, though Super Mario Run requires a $10 purchase to experience a majority of the game. Apptopia believes that a lower price point would give Nintendo $50 million in revenue this month as opposed to $30 million as things stand now.