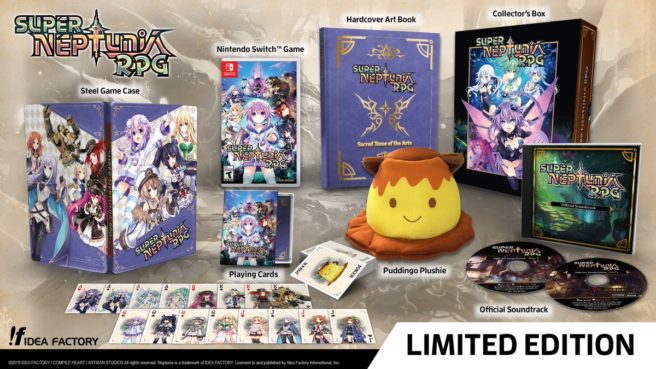 A limited edition for Super Neptunia RPG is on the way, Idea Factory has revealed. North American and European pre-orders go live on May 28.

Here’s the full rundown as to what’s included:

Puddingo Plushie
Nep’s trusty Puddingo has leapt out of its 2D world and is now 3D! Its soft, squishy body might be tempting to eat, but beware – this Puddingo bounces back. Just treat it right and it’ll take you to a higher level!

Warning: This item is not consumable.

Reversible Cover Sleeve
Gamindustri has changed! And now you can change the Cover Sleeve on the Super Neptunia RPG Standard Edition. Flipping the cover sleeve will reveal the original Japanese Hero Edition art!

You’ll be able to pre-order the Super Neptunia RPG Limited Edition on the Idea Factory store here. Pricing is set at $84.99.