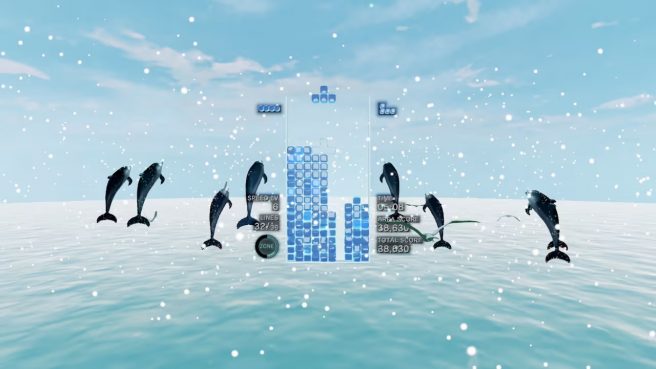 A new 1.2.5 update has been made available for Tetris Effect: Connected on Switch. It comes with a significant number of bug fixes and improvements, so you’ll want to make sure to download it if you have the game.

Below are the full patch notes for the Tetris Effect: Connected version 1.2.5 update:

[SWITCH] Fixed a crash that could sometimes occur when transitioning to the match after both players hit Ready in Ranked Match.

[SWITCH] Fixed an issue where OK (A) or Back (B) became unresponsive on the RANKED MATCH / FRIEND MATCH selection screen when Airplane Mode was enabled.

[SWITCH] Fixed an issue where controllers other than Player 1’s controller did not rumble in a LOCAL MATCH. (We are still currently investigating rumble-related issues in CONNECTED and CONNECTED VS modes.)

[SWITCH] Improved cracked sound/slower music playback issues in the Journey Mode stage Starfall. (This may still happen when playing extremely quickly. We are continuing to work on improving this.)

[SWITCH] Fixed an issue in CONNECTED and CONNECTED VS modes, where TRIMINOs could be placed in the air in certain cases.

[SWITCH] Fixed an issue where the game de-synched if opening a system menu during an online multiplayer match.

[SWITCH] Fixed an issue in single player rankings where some players were mis-ranked or did not display in the rankings when there was another player with the same name.

[SWITCH] Fixed an issue where PINs of some locations were misplaced on the Earth in the EFFECT MODES lobby.

[ALL] Fixed an issue where the game softlocked when pressing OK with an incomplete ROOM ID.

[ALL] Other minor adjustments and bug fixes.

[SWITCH] Online matchmaking may fail when resuming from sleep/rest mode. If you encounter this, please reboot the app.

[SWITCH] When putting Nintendo Switch into sleep mode while playing JOURNEY MODE and EFFECT MODES and resuming from sleep, in certain cases your scores will not be registered to the rankings. Although partially improved in this patch, you may still encounter sleep-related issues. We continue to work on further improvements as a high priority.

[SWITCH] In JOURNEY MODE, framerate can drop severely in certain stages (e.g. YIN & YANG) at the very start of the stage. (This will be fixed in the next patch.)

[QUEST] Cloud save is not supported due to instability with the Oculus system. Until it is worked out and restored, please do not uninstall the game as it will wipe your save progress. If you are having problems with your game launching, restart your headset; if that is unsuccessful, please contact Oculus support.