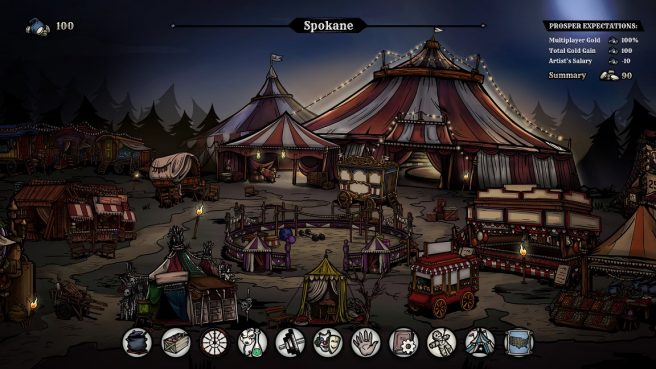 Klabater and Juggler Games today announced The Amazing American Circus, a new project featuring card game, tycoon, and adventure elements. It will release on Switch in 2021.

We have the following overview and trailer for The Amazing American Circus:

The Amazing American Circus is a unique blend of a card game, tycoon, and an adventure game. Build a wandering circus, collect a strong deck of cards, gather a fantastic troupe of artists and performers, and travel across the 19th century United States! Dare to challenge the legendary P.T. Barnum and make your enterprise the most incredible show of America!

The Amazing American Circus tells the story of the most iconic entertainment in American history. The USA, during the Gilded Age, is a turbulent place with serious social problems and rapid economic growth with railroads and industrialization leading the way. On the East Coast, a modern metropolis springs up, while in the west, cowboys and robber barons and farmers battle for a piece of the new American dream… A new era is coming, and it may be the right moment for a traveling circus to flourish.

You take the role of an impoverished owner of a traveling Circus. Through your personal and multithreaded story, The Amazing American Circus reveals mysteries behind a uniquely American form of entertainment.

Deliver a perfect show in a special card duel between you and the audience. Boredom is your enemy, and your performances and tricks are your best weapons. Choose your cards wisely and try to figure out the mood of the crowd. As a traveling Circus owner, you need to look for new troupe members. During your travels, you will try to gather an exotic crew of performers, but can you deliver the best shows, win the audience’s approval, or will you fail?

A unique story filled with love affairs, hateful enemies, and magnificent shows with challenging audiences and quests, all of this wrapped up in a writing style that resembles the dime novels from the turn of the 20th century – that’s what The Amazing American Circus offers.

– Save a run-down circus, gather a troupe of performers, and dare to defy the greatest showman on earth – P.T Barnum himself.
– Enjoy an original and challenging card game. You will battle against your greatest enemies, audience boredom, and stagnation.
– Gather a group of extraordinary artists and twisted individuals, each with their own story to tell, and journey across the 19th century United States.
– Indulge in a story set in the turbulent times of the Industrial Revolution and the dusk of the Wild West era, and dive into the beautiful and grim world of the American folklore
– 100+ real historical and legendary characters from the verge of the 19th and 20th century to encounter, such as John D. Rockefeller, Susan B. Anthony, or Nikola Tesla.
– Experience an epic soundtrack inspired by classical circus music