The Dark Crystal: Age of Resistance Tactics dev on how the game came to be, translating the look, more 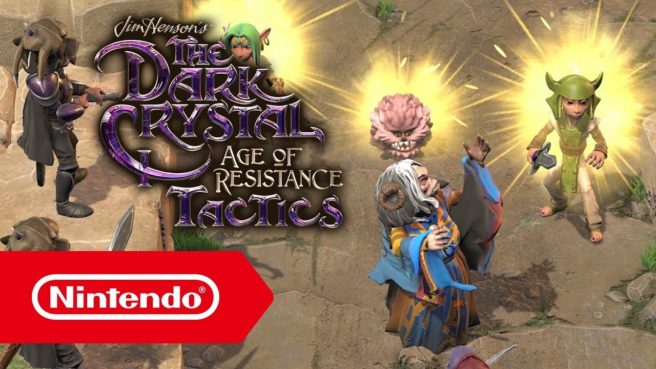 Nintendo has published a new interview with Dave Pottinger, the director of The Dark Crystal: Age of Resistance Tactics. Netflix had announced the Switch game back in June.

During the interview, Pottinger spoke about how the project came to be in the first place and what it’s been like translating the look of the movie / TV show. He also weighed in on some other topics like working with the creators.

Let’s start with an easy one. What kind of game is it?

Our game is a strategy RPG set in the time period of the new Netflix show, The Dark Crystal: Age of Resistance, which actually predates the events of the original movie by about 100 years. There are thousands of Gelflings still alive, arranged in seven different clans. Several different heroes band together to battle against the Skersis.

How did this project come about?

Were you already a fan of the original movie?

We are huge fans of The Dark Crystal. I saw it several times in the theater, and for me, it helped form how I think about fantasy. The designs in the original movie are some of the most seminal in the fantasy landscape. So being excited to work on this is an understatement.

How closely did your team work with the creators of the Netflix show?

We worked very closely with both the creators from Netflix and The Jim Henson Company. We’ve been out to [Jim Henson’s] Creature Shop, gotten measurements from the molds they use to make the puppets. Our artists were going nuts – it was kind of a playground for us. It was also huge for us to have someone who knows the franchise inside out to critique our work. It’s a really great kind of collaboration.

Speaking of puppets, was it hard to translate the very distinct, puppet-based look of the movie and Netflix show into a video game?

For us, it was important to talk about the motion and the animation, and we actually changed the way that we model the units. We tried to build them in a way that’s analogous to how the puppets are made. So when the animators rig the models and animate them, it more naturally follows the way that puppets work.

And again, you know, the fans will tell us whether or not we’ve done a good job – but we certainly tried to capture that unique feel in the world. One of the fun things with working with The Dark Crystal is that it has a special place in people’s hearts – because it’s puppets, you know? It’s not full-on, perfect CG.

What can you tell us about the gameplay?

If you’re familiar with the genre, we have a job system where you can mix and match to customize your team and play how you want to play. The jobs will also have levels which will then unlock new abilities or make existing abilities better. There are also upwards of 20 characters that you’ll be able to unlock and upgrade, and there’s a gear system where the gear is clan-based… it’s really about giving the player options. It’s very easy to get, but the depth is there for people who want those things.

Who is your favorite character from this universe? And if it’s not Fizzgig… why is it not Fizzgig?

(laughs) Definitely, Fizzgig wins. If you saw the Treehouse Live gameplay at E3, he has this awesome little roar. And then there’s a level where you have to save a Fizzgig from the Chamberlain – when you do it, Fizzgig does a little victory dance on top of the fallen enemy.

You know, The Dark Crystal has a lot of darker themes in there. Things like the Fizzgigs provide some really important levity to the world. And, as game developers, we latch onto things like that, because those are often the characters that people love the most.

The Dark Crystal: Age of Resistance Tactics is slated for Switch later this year.