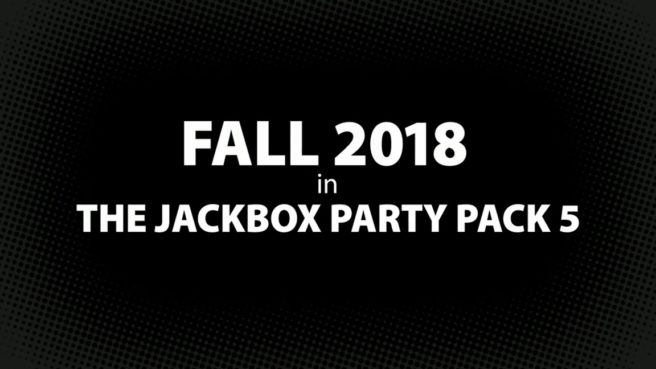 Jackbox Games was present at C2E2 today with a panel. And at the event, the studio announced its next project: The Jackbox Party Pack 5. What we know at present is that it’ll have eight player support, a bigger and crazier Jack Attack, new question types, audience integration, and more.

Platforms for The Jackbox Party Pack 5 haven’t been confirmed, but this will be a no brainer for Switch. After all, the previous entries are already on the eShop.

Here’s the full rundown on The Jackbox Party Pack 5 including a teaser:

Is this the same old You Don’t Know Jack I know and love?
Yes! Cookie returns with all-new twisted trivia questions and the latest in creative insults for you and your fellow players. Fan favorite question types are back, including the DisOrDat and the triumphant return of the Gibberish Question.

But… there’s new stuff too right?
Yes! We didn’t want to do another YDKJ just because we could. We wanted to wait until we had a fresh take on the classic formula. This version sees the game (and Cookie) acquired by the friendly corporate overlords at Binjpipe, your premiere media bingeing streaming service. It’s a big scenery change that’s led us to update the game in really fun ways, and given us a ton of new stuff to make fun of.

I was hoping for a list of easy to digest bullet points?
Okay fine. Here are just a few of the features you can expect in the new You Don’t Know Jack:

What if I’ve never played a You Don’t Know Jack game before?
Here’s a quick recap of what you missed in past installments: a lot of questions about The Brady Bunch. Now that you’re caught up, you should be ready to jump into the new game!

Do I use my phone to play? Because I have OPINIONS about that….
Yes, like all of our Party Pack games, you use your phone (or other web-enabled device) as your controller. It’s what lets us support eight players, the audience, and question types with unique interactions. If you’ve played any of our recent games, you’ve probably seen that this works pretty well. If you haven’t, know that we’re designing this You Don’t Know Jack from the ground up with the strengths of phone controllers in mind.

Can I play single-player?
Yes. We’re making a lot of tweaks that we hope will make this YDKJ very accessible to new players, but if you STILL can’t convince your dumb friends to play with you, you can always play with yourself.

Great! When can I play it?
You Don’t Know Jack (full name TBD) will be one of five games included in The Jackbox Party Pack 5, coming Fall 2018 to PC, consoles, and major digital platforms. But, if you can’t wait that long, check out our weekly interactive live streams on Twitch and Youtube. It’s your best chance to see and play our games before anyone else!

Wait, I get You Don’t Know Jack AND four other games??
Yeah and the other games are awesome too. If you want to stay up to date, sign up with your email below, and don’t forget to follow our Twitter and Facebook.