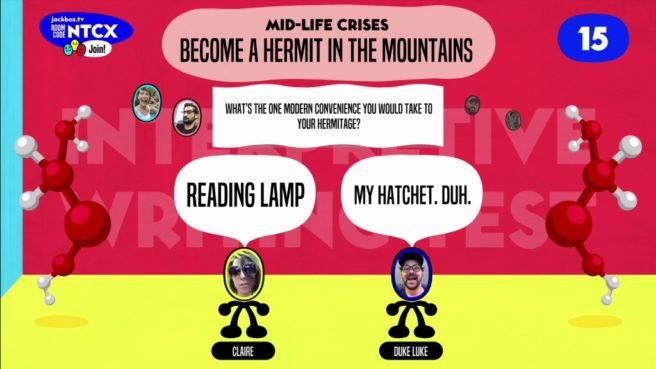 Today, Jackbox Games unveiled the final title that will be included in The Jackbox Party Pack 6. Fans can look forward to Role Models, an experience in which “you and your friends become guinea pigs for a mad scientist studying human nature.”

Below are the full details on Role Models, including a video:

In Role Models, you and your friends become guinea pigs for a mad scientist studying human nature. Just choose a category, like Alice in Wonderland, then match each of the players (including yourself) to a “role” within that category. For example, your carefree buddy might be the Mad Hatter, and the creepy weirdo of the group might be the Cheshire Cat. If your test subjects are split on who’s who, tied players perform a tiebreaker experiment tailored specifically to that role to determine who truly deserves the title.

If you don’t know anything about these characters, don’t worry. There are plenty of categories to choose from, including ones that have nothing to do with pop culture, like “Excuses for Being Late,” “Deepest Fears,” and “Reasons Why You Crapped Your Pants.”

As you earn more roles, Role Models begins to hone in on which characteristics fit you best: if different categories peg you as both a show-off and an introvert, you’ll face a challenge, and your fellow lab rats will make the final call. The game awards you with delicious “science pellets” for voting with the majority and winning tiebreaker games, but the real payoff is seeing your final master role, made up of all the previous roles you’ve earned in the experiment. If you got Captain America, Pikachu, and “slept through my alarm,” you might be crowned the “Lazy Electric Patriot” of your friend group. And once it’s official, there’s no escaping it. That’s science, baby!

Role Models supports 3-6 players and an audience of thousands in the “control group.” It’s also Jackbox’s first game to support player selfies as avatars! This long-awaited feature is totally optional, and streamers worried about abuse can censor individual photos or turn the feature off entirely.