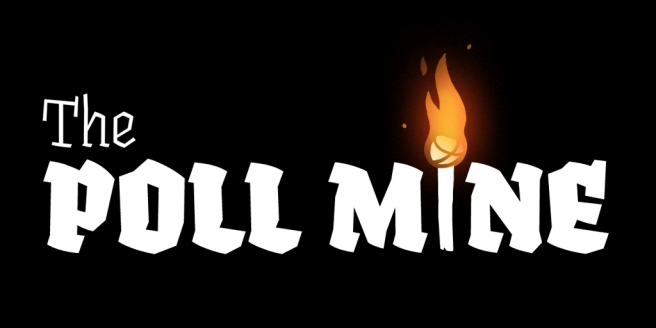 Amidst the chaos of E3 news over the past week, Jackbox Games casually dropped the reveal of the second game in The Jackbox Party Pack 8. Newly confirmed for the digital collection is The Poll Mine.

Here’s how it works:

You’re trapped in a magical mine! A maniacal witch is hot on your heels and your team depends on your next move. In front of you stands 8 doors. The only way to pick the safe path is to determine which home appliance is the least trustworthy… according to people you’re playing with.

This is the peril of The Poll Mine. Jackbox Games’ very first head-to-head team game. After being divided into two groups of adventurers, you have to select your top three choices in categories such as:

While you mark down your opinions, the other players will do the same, and the path to escape will be marked by the top three most popular answers… OR is it 2nd through 4th?… OR do you have to start at the bottom? The criteria will change based on the whims of our wickedly devious host.

You and your team will have to open doors until you find the options you’re looking for, but be careful while you debate, the other group of players is listening and may steal your insights to find the right door and leave you in the dark. FOREVER!

The Poll Mine supports 2-10 players with an audience of 10,000… AND there will be a streamer mode that, when toggled, activates all of our settings designed specifically for livestreaming!

The Poll Mine: the most exciting game to come out from Jackbox Games!…but that’s just our opinion. If you want to keep up with future announcements about The Jackbox Party Pack 8, don’t forget to follow us on Instagram, Twitter, TikTok and Facebook and subscribe to our email list in the footer of this page. Learn more about our other revealed title in this new pack, Job Job, here.

The Jackbox Party Pack 8 is due out on Switch this fall. We have information about the previously-announced Job Job game here.