Tiny Troopers: Global Ops getting a physical release on Switch 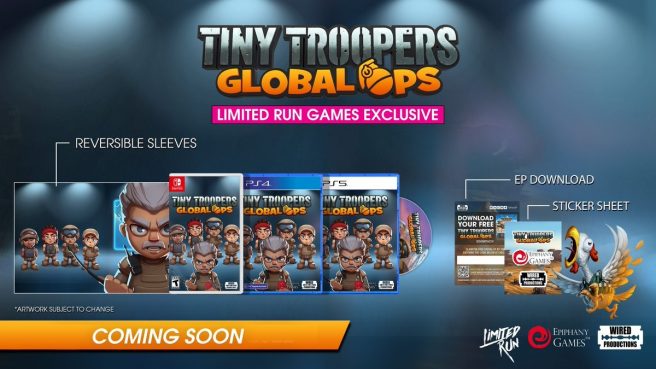 A physical release of Tiny Troopers: Global Ops is in the cards for Switch, it’s been announced.

Limited Run Games will be releasing the game as part of its distribution line with an exclusive variant cover, and it’ll also come with an EP download and sticker sheet. Note that retailers like Amazon and GameStop will also be selling a physical version as a standalone copy.

Tiny Troopers: Global Ops was announced for Switch in 2021, and was originally planned to launch later in the year. Wired Productions and Epiphany Games have not shared an updated release window.

Tiny Troopers: Global Ops is a fast-paced arcade twin-stick shooter in which you lead an elite squad of Tiny Troopers on action-packed missions to take down hordes of unscrupulous enemies from all corners of the world.

Yes, the Troopers are ready! Battle hardened, razer focused and raring to take on daring new missions. So, suit-up and lead your squad into explosive battles with epic campaigns against legions of heavily armed adversaries, you’re the best of the best, and it’s time to provide it in Tiny Troopers’ biggest ever ops.

Be prepared to be thrown right into the thick of battle with explosive new games modes, and remember, we never leave a soldier behind! Are you ready to doge withering hailstorms of gunfire, evade devastating explosions, and avoid traps? Then answer the call of duty and lead your squad of Tiny Troopers to victory in all-new multiplayer battles and 4 player Couch Co-Op.

Pre-orders for the physical version of Tiny Troopers: Global Ops begin on August 9, 2022. Limited Run Games will be taking reservations on its website here. Other retailers will follow at a later date.