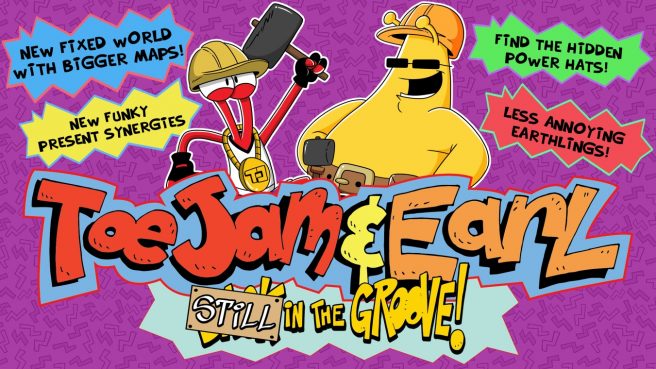 ToeJam & Earl: Back in the Groove is getting a pretty big patch on Switch in the future. Known as “Still in the Groove”, the update features new bigger Fixed World maps, changes to Earthlings behavior, Power Hats hidden on the map, and more.

[Power Hat Changes]
Power Hats will no longer be automatically gifted to players when stepping off the Elevator
Power Hats must be found on the level by searching bushes and trees
Power Hats sparkle while hiding
Power Hats will fly around like flying presents when found, they will land after a short time
Power Hats now provide 100XP when picked up
Power Hat weights adjusted to make some hats more rare and some more common
Removed hitbox offset while wearing Hat of Sure Walking

[Balance]
Ship Pieces now reward correct XP when picked up
Remove level cap on presents in all modes. (This means you can find ALL presents from the beginning of the game)
Button/Coin Meter chains are maximum 4 presses
Speed up animation when pressing button/feeding coin meter
Removed forcing the player into position when feeding Coin Meters/pressing Buttons
Removed forcing the player into position when speaking to a friendly Earthling
Adjustments to camera while falling down levels
Present timer now pauses when falling
All inputs disabled while falling (prevents players opening presents and teleporting)
Added XP Notification to bottom left of HUD
Adjusted XP Bar Colors to hopefully be more noticeable to new players
Removed multiplayer only presents from showing in single player games

It’s unclear when exactly the update will be ready on Switch. When it does go live, we’ll definitely let you know.