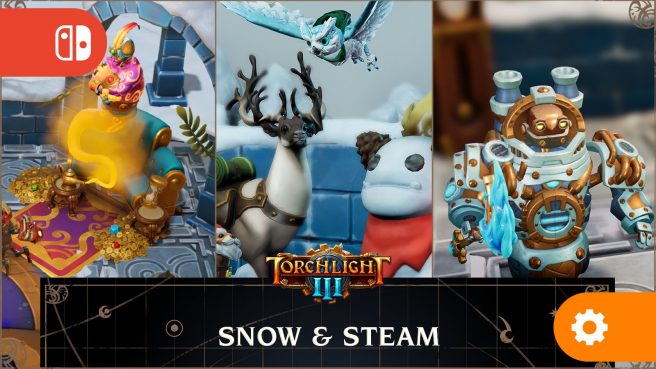 The action-RPG Torchlight III was recently updated again on Switch. Version 1.6.103537 is available, which brings along many fixes.

• Fixed the ‘Listen Only’ option that did not block speaking under certain circumstances.

• Removed a prop that was blocking the entrance into Voltura Village.

• Removed an invisible wall that appeared to be blocking progression in a specific instance.

• Fixed an instance in the Venomous Nest where the area near the entrance could generate a path blocking prop.

• Moved an Ancient Cache chest prop that was able to appear behind a path blocking quest prop.

• Fixed some cases where placing the Luck Sprout in your fort prevented players from interacting with it.
• Fixed an exploit found with Multiplayer Wardrobes.

• Fixed some Fazeer items that should not scale. This fix is just for certain items/affixes that do not actually scale, but the tooltip was claiming that they were, and in addition, corrects the limitations for the enchanting slots, which were incorrectly scaling up when they should not have been.
• Fixed Fazeer boss cards that were blank.
• Gear Bags opened in Fazeer no longer take on the Bonus affix of that Dungeon.
• Fixed an issue where the items that got equipped automatically while in Fazeer Dungeon’s would lose their bonus affix.
• Fixed Boosted Recipes that were found in Fazeer that were a visual bug only.

• Fixed the following quests that did not have enough items to complete on a specific Dungeon seed.
– “Silky Threads”, “Operation Maple Dawn”, “Gob Bomb”, “Ichory Situation”, “Unpinned”, “Part Picking”, “Tablet Game”.
• Reduced required count of Netherim Jawbone from 3 to 1 for the Nether Inkling quest.
• Fixed “Tutorial: From a Humble Seed” getting stuck with no other objectives/tasks.
• Removed “Clue” from quest item drops in “The Artifact” story quest. This was an optional quest item that is not needed to progress the story.
• Fixed an issue where the player cannot complete Power Up due to missing Ancient Caches for Ember Generator Manual for the Cheat Codes mapworks quest.
• Repositioned the goblin fishing spot (and spawner for Ol’ Wormfingers) at the end of the goblin river run mapworks area to address situations specific to this area where he would spawn out in the water. Shrank the spawner area attached to the goblin fishing spot and moved it closer so that it can all fit into a tighter space. This affects all seeds/locations within this area that the fishing spot can appear.

• Items that get added directly to your inventory now have their dye/styles unlocked.
• Players can now see the original dye/style they originally had and switch back to the original option if they so choose.
• Removed the unobtainable items found in the style station.
• Fixed the Random Fort Decoration bags that were not showing their preview window when claimed.

• Fixed an issue where the items that are automatically equipped when picked up in the Fazeer’s lose their Challenge Bonus.

• Fixed Frostwall’s Cooldown for Call the Legion skill that was not reduced when equipped in the Legendarium.

• Fixed the winter contracts image that does not render immediately after opening the tab.
• Fixed the broken number that appears on the Snow & Steam contract once it’s completed.

• Fixed the alpacas that would disappear before they are defeated on the Secret Alpaca Level.
• Moved Gunsmith’s Grundy’s spawner in Dungeons to make him more reliably spawn.

• Fixed the Lantern Flash Tier 2 bonus that is now set to 10%, down from 65%. Character stat screen now reflects the right percentage.

• Fixed an issue where the player can obtain a +75% damage buff that does not fade away until the end of the play session by allowing minions from the relic skills to disappear inside the Consecration area of effect.

Torchlight III is out now on Switch via the eShop.