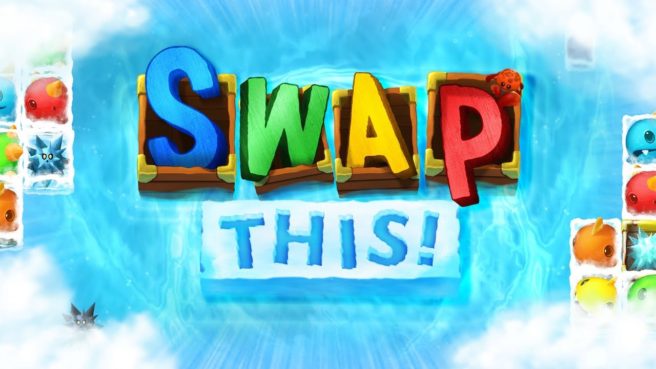 Toki Tori developer Two Tribes has announced that it will release Swap This! on Switch next month. Though the studio has stopped making games, it’s still able to bring older titles and projects to newer platforms. Case and point: Swap This! on Switch.

Swap This! was actually thought to be “lost in the Two Tribes treasure chest”. Now though, the “arcade-style puzzle experience” is receiving a proper release.

Swap This! is here to make matching puzzle games exciting again! It’s a game in which gaming skills like fast reflexes and tactical thinking actually count for something. Players still match colors, but once they get the hang of it they’ll be juggling multiple chain reactions in real time while strategically deploying power-ups to beat giant enemy fish!

A new game from Two Tribes?
More than 7 years ago, we decided we wanted to make a puzzle game that really challenged gamers’ skills. We felt this was lacking from the puzzle genre, and we still do.

Swap This! never got a proper release and lingered in the Two Tribes treasure chest, deemed lost. With the arrival of the Nintendo Switch we decided to bring it to the surface, polish it up and make it available to puzzle players worldwide.

Why Switch and not another console?
Because Swap This! plays best on a touch screen. ‘Arcade-style’ is the perfect description: you need skill to play, it’s lightning fast, and you even have to beat giant enemy fish!

What’s different from your usual sugar-coated matching puzzle?
In Swap This! you can swap colored ice cubes anywhere on screen, whenever you want, in real time. So getting good really comes down to dexterity and tactics. You’ll soon find yourself building up screen-clearing combos!

Additionally, the game includes 5 super-charged power-ups and 4 distinct play modes. There’s a ton of stuff to keep you busy!

The best part? Swap This! for Nintendo Switch is only 1.19 $/€. It’s available for pre-order starting TODAY!

Swap This! launches November 2 via the Switch eShop.