Use Your Words 2 confirmed for Switch 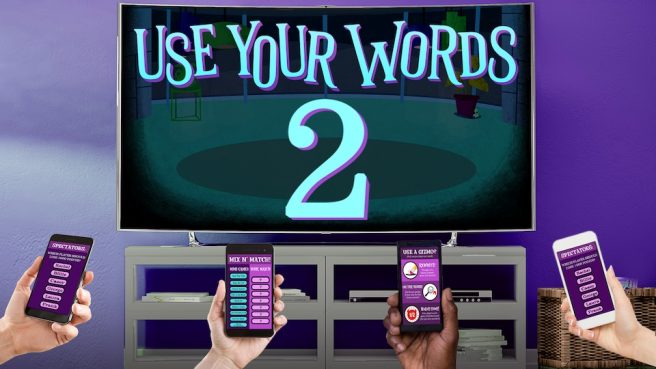 Thanks to a successful Kickstarter campaign, Use Your Words 2 will be made for Switch.

Smiling Buddha Games started seeking funding about a month ago. While the project itself met its $40,000 goal, a Switch-specific Stretch goal sought $50,000. The good news is that this mark has been reached as well with just over a day remaining in the campaign.

Use Your Words 2 builds on the success of the original as another party game. The team is promising twice the amount of mini-games, more content, and new features. The core idea is that Use Your Words sets up a joke, and it’s up to players to fill in the punchline. If you’re a fan of The Jackbox Party Pack, this may very well be right up your alley.

Included games are Blank-o-matic, Book It!, Sub The Title, Extra Extra!, Survey Says, Sign Me Up!, Out of the Question, Fill in the Blank, and Letterheads. New features include power-ups, the ability to choose which mini-games to play, an improved Spectator Mode, and more.

As for why Smiling Buddha Games decided to make Use Your Words 2 rather than updating the original, the developer explained:

We’re immensely proud of what we were able to do with the first Use Your Words, but with such a small budget and an experimental development style, we didn’t quite capture our ultimate vision for what the game could be. To do that, we can’t just reskin our old code; we’ve got to rebuild it from the ground up! Releasing a sequel rather than DLC will make for a better and deeper player experience and allow us to update the game more often… in other words, it’ll be more fun!

And here’s a video:

Those that want to support Use Your Words 2 on Kickstarter can do so here. The first game hit Switch in 2017 and is available on the eShop.