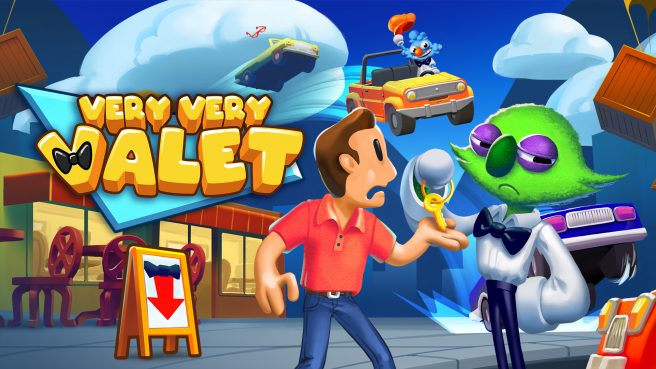 We’ve got an update on Very Very Valet, the madcap couch co-op party game announced for Switch during an Indie World Showcase at the end of last year. Nighthawk Interactive is now confirmed to be publishing, and a physical version will be distributed. The game is also now planned for a May 25 launch.

Here’s some information about Very Very Valet as well as a trailer:

1 to 4 players control an “elite” team of puppet valets, working together to overcome any and all valet-related challenges. It’s going to take teamwork and a certain “just park it anywhere” mentality to save the world from a severe parking crisis! It’s not enough to just be a valet – be a VERY VERY VALET.

Valet alone or with friends! Up to four players can work together to solve this severe parking shortage. Help each other and hitch a ride, or cause chaos launching your fellow valets wildly – the choice is yours!

Driving has never been easier – just point and go! Accessible driving controls allow anyone to quickly become a valet, with plenty of hidden techniques for mastering your valet game and cornering the market.

The World is your Parking Lot

Show off your car corralling skills in over 20 unique levels! You’ll be helping out customers in a variety of locations and scenarios – city streets, cliffsides, bowling alleys, airports, and even trainyards.

Join this elite squad of valets! Whatever the parking need, Very Very Valets are ready to accept the call. Grab your friends and leave no car unattended!

Those that purchase the physical version of Very Very Valet will receive an exclusive playable Valet. The game will be priced at $29.99.