What do YOU think? – Wii homebrew

Note: Make sure to check out the selected response from last week’s article after the break!

This week’s topic is something a lot of people love, a lot of people hate, and a lot of people are on the fence about: Homebrew. For those that don’t know, homebrew is the act of “modifying” your Wii to enable it to play music, watch movies, run games, and a plethora of other thing that expand the usability of the console beyond what it was original intended. The entire process is free, but it runs the risk of “bricking”, or permanently breaking your Wii console. For many people, homebrew is used to illegally download roms of games in order to dodge paying for them, but for others, like myself, it’s used in a strictly legal way.

The principal thing that I use homebrew for is to listen to music while doing schoolwork or writing articles for NE (like right now!) when another medium of doing so isn’t available. I just stick the music onto an SD card and pump it through my TV’s speakers via an homebrew app called “MPlayer Wii”. Additionally, a radio app called “WiiRadio”, which grabs signals from the SHOUTCast website, allows me to pick from thousands of user-run radio stations that stream over the internet so I can get my favorite style of music right from my couch. These two things are just one of many legal things that homebrew can do.

Another thing that I find homebrew is useful for is playing homebrew games, such as Super Mario War. Super Mario War is essentially the idea of New Super Bros. Wii, but geared towards competitive play. Featuring full 2D graphics, up to four players can battle through a variety of stages and simply try and jump on top of each other to get points. It supports bots, a level editor (controlled via a PC), power-ups, different sprites for your character, and tons of options to make sure the fun never stops. As far as I’m concerned, in some ways, this game itself rivals something like Super Smash Bros. in terms of multiplayer fun, so I’d definitely recommend it to anyone that’s able to get their hands on it. But a game like this brings me to my next point, which is gray-area homebrew games. 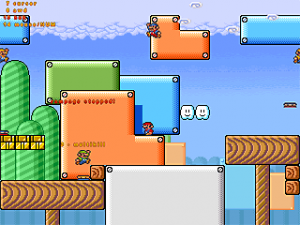 “Grey area” homebrew refers to a production that uses copyrighted material of another company, in this case, Mario. The main reason why this is considered illegal is because these characters or games or levels or music are used to garner profits for the person or company producing the game. In the case of Super Mario War, the game is entirely free, and those who make the game don’t gain anything from making it, nor cause Nintendo to lose money by distributing it. On the other hand, many people would argue that merely stealing someone’s ideas or exploiting a character that isn’t rightfully yours is bad enough to warrant the shutdown of your project.

Another more severe case of gray area homebrew is the use of New Super Mario Bros. source material to create custom levels that can be played using the disc and a homebrew channel known as the “New Super Mario Bros. Wii” channel. Hackers have recreated levels from past Mario games, and even made completely new levels with their skills, all of which are available for free. Now, is this any worse than Mario War? Since they’re using the genuine source code from the game disc, some would say yes. Personally, I don’t see a problem with it as long as they don’t gain any profits from the distribution.

Of course, there are plenty more things you can use homebrew for. Watching movies from an SD card, playing tons of fun games, playing around with weird apps (Christmas countdown timer?), and even installing the Linux OS are all possible. It’s a versatile piece of material, but here’s the question of the week for all you readers: How do you feel about homebrew? What homebrew is acceptable? What homebrew is not acceptable?

Leave your answers in the comments section below!

I’m not particularly great at formalities, so I’m just gonna jump out and say that I’m incredibly pleased with the responses we got with the first WDYT article. I was expecting some comments, like our most popular news stories get, but many of you wrote a huge block of text talking about your favorite first party Nintendo franchises. It looks like a bright future for these articles indeed! But let’s jump to the point. Last week, I talked about how Zelda was my favorite Nintendo franchise, and I asked all of you fine people what franchise was YOUR favorite. The most overwhelming answer by far was, in agreement with me, The Legend of Zelda, but the best answer we found from last week was by Rafael, who talked of his love for Nintendo’s Sci-Fi masterpiece, Metroid.

If you had asked me this question ~2 years ago, I’d have answered Mario as my favorite Nintendo series (and either Super Mario Bros. 3 or Super Mario Galaxy as the franchise’s best game). And that’s because until then I had never played a Metroid game.

All the contact I had with Metroid until then was through Samus in Super Smash Bros Melee and one time, several years ago, when a friend of mine showed me Metroid Prime on Gamecube. He was fascinated by the game, but, to be honest, I was quite underwhelmed by it. In that point in time, my FPS exposure was games such as Doom, Wolfenstein 3d, Duke Nukem 3d, Unreal, Goldeneye, Perfect Dark, Half-Life, Counterstrike. Metroid Prime was nothing like those games. I remember I kept thinking while he showed me the game: “…but there are so few enemies in the rooms… it’s such an empty world… those enemies pose no threat… you gotta scan everything!?… what a damn slow game!”. And that was my impression of Metroid until quite recently.

A few months after I bought my Wii, I was in the mood to try some VC games which I had never played before. I researched a bit on forums which games people were recommending the most, and Super Metroid was topping most of the lists. I said ‘what the hell… maybe I should give Metroid another chance… let’s see if it’s really that good’. I bought it, started it up, and oh my god… Metroid fan for life! hehe

I just love the atmosphere in Super Metroid. The exploration. The action. The fact that there’s more emphasis on exploration than action, but even still, the action is great. Also the platform elements. The secrets. The power-ups. The music. Goddamn, what a masterpiece.

After beating it and falling in love with it, I proceded to buy a copy of Metroid Prime and reavaliate it. Now that I knew that the Metroid series was actually about, I went to it not expecting Goldeneye, and instead Metroid. In 3D. And it delivered. It also went automatically to my top favorite games.
Now I’ve played almost every game in the series (still haven’t gotten to Zero Mission nor Metroid II) and yeah, best Nintendo series, no doubt about it. Super Metroid is the best game Nintendo ever made. My second favorite game ever (Starcraft is first, if you’re curious). But all other Metroid games that I’ve played are awesome (except the NES one; revolutionary, but extremely dated).

I like Zelda a lot, but the only game in the series that would land in my top favorites is A Link to the Past, even though I also like Twilight Princess a lot. I can’t really relate to people who find Ocarina to be the best game ever. It never crossed my mind ‘wow, I’m playing one of the best games ever!’ during any of the times I’ve played it since it came out. That line crossed my mind during Super Metroid and Metroid Prime, though. I dunno, I can’t find anything objectively wrong with Ocarina. But it never had that big of an emotional response with me. Nor most games in the Zelda series, except maybe A Link to the Past.
So, Metroid as number 1 Nintendo franchise for me. Mario as number 2. Smash Bros would be number 3 (Brawl as the best game).

Huge thanks to everyone for sharing your opinions! Feel free to discuss this, and many other gaming-related things, in our forum!