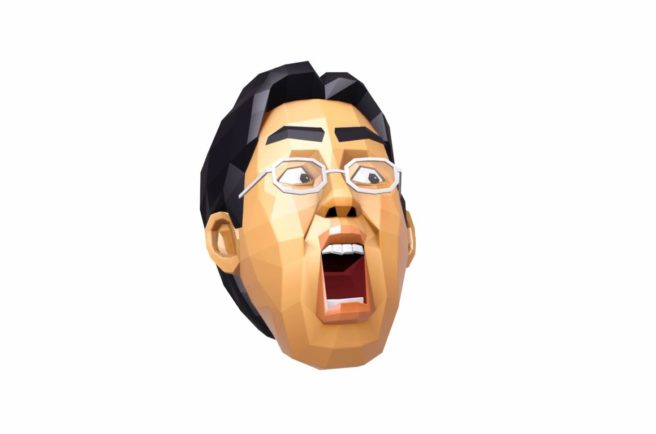 In the interview, Kawamoto spoke about the design process for the original game and how they decided on the look of Dr. Kawashima. Here’s our translation of the excerpt:

Kawamoto: In our initial proposal, we planned to use Dr. Kawashima’s actual likeness, but it felt really strange having his actual face appear in the DS game. So afterward, we put together another idea that had Dr. Kawashima illustrated as a character with a graduation cap on, but our department head at the time, Takahashi, saw it and said, “Nah, this is no good.” He gave us a few suggestions and from there we imagined the final boss from “Star Fox”, and that’s how we decided on this rough, polygonal look.

That was actually the inspiration? Really? (Laughs)

Kawamoto: Yes, but we of course had to make some changes to make him more of an amusing character. Takahashi and the head designer put a lot of love into it, but I was still worried if Dr. Kawashima would give us his approval on the design. Many university professors are quite serious, right? I remember being on my way to the university to talk with him, figuring he was going to hate it.

Kawashima: But I like fun stuff like that, so I gave it the go-ahead. I mean, I didn’t really think it was going to become such a staple like it has, though.

And now you’re finally a character in the “Super Smash Bros.” series, too.

Dr. Kawashima’s Brain Training for Nintendo Switch is currently available in Europe and Japan. A North American release has not yet been announced.