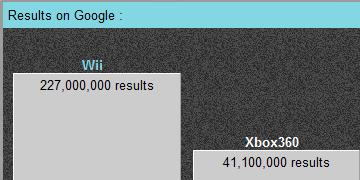 Okay, this might not have been the best way to analyze the winner for this console generation. As many may have assumed at this point, this data was collected by Google Fights. The Wii does, however, has the most pages on Google according to this service, followed by the PS3 and  Xbox 360 in that order. To be honest, I don’t think there will ever be a real way to declare a winner, especially with all of the arguments between each side, but hopefully things like this will lighten the situation for video gaming fans.