Witch on the Holy Night confirmed for the west, out in December, English trailer 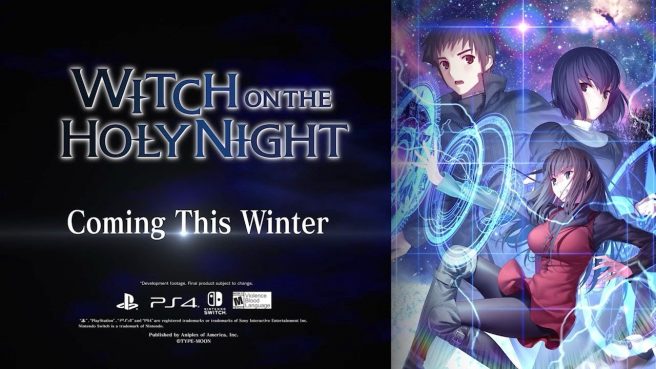 Witch on the Holy Night was previously confirmed to have English support, but publisher Aniplex and developer Type-Moon today made it official that the title is seeing a release in the west – and an actual date was provided as well. Fans outside of Japan will be able to pick up the title on December 8, 2022. That’s the same day as the Japanese launch.

Aniplex has shared the following overview for

What is Witch on the Holy Night?

Set in 1980s Japan, Witch on the Holy Night tells the story of fan-favorite TYPE-MOON character Aoko Aozaki as she attempts to navigate the complex world of magecraft while also dealing with the everyday struggles of life as a high school student! Players will experience the thrilling origin story of this much-beloved character, penned by Kinoko Nasu, famed creator of the Fate series, himself.

The original PC version’s beautiful visuals will be remastered in spectacular high-definition format to create a modern gaming experience sure to delight TYPE-MOON fans and franchise newcomers alike! Prepare for the definitive version of one of Kinoko Nasu’s most beloved works.

In addition to the visual update Witch on the Holy Night will receive, the remaster will include new, fully voiced dialogue. Now players will hear every word from every beloved character performed by a cast of incredible voice actors in the original Japanese.

Witch on the Holy Night provides an incredibly rich narrative with a delightful cast of characters for players to enjoy. In addition to a main story, the remaster will also include two side stories.

Get a look at an English trailer for Witch on the Holy Night below.

Witch on the Holy Night will cost $39.99 on Switch. Aniplex has not clarified if a physical version will be made available in the west, though importing is always an option.