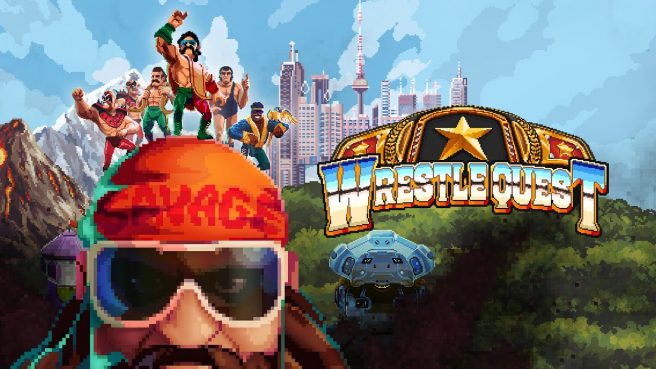 Publisher Skybound Games and developer Mega Cat Studios today revealed WrestleQuest, a new wrestling RPG. A release date hasn’t been shared just yet, but we do know that a Switch version is planned.

Powerbomb and piledrive your way through a massive pixel art universe where professional wrestling and RPG fantasy collide.

– Wrestle with Destiny – Take a hero’s journey… in tights! Upgrade from aspiring rookie to world champ by training, learning, glamming, and SLAMMING to the top of the pro wrestling food chain.
– Your Idols Await – Draw inspiration from wrestling icons like Jake the Snake Roberts, “Macho Man” Randy Savage, and even Andre the Giant. Explore worlds based on their lofty careers.
– Heart-Pounding Action – Classic RPG combat meet wrestling moves, match styles, and gimmicks galore.
– Good Guys, Bad Guys, Lizards, Robots, and More – Wild realms, exotic monsters, action figure fighters, and spandexed allies await as this fantasy goes beyond the ring.
– Gear Up on Your Way to the Top – Choose your moves, style, taunts, and even your entrance as you learn what it takes to be the cream of the crop in the pro wrestling world of your dreams.

We’ve included the first trailer for WrestleQuest below.

WrestleQuest will be sold digitally on Switch as an eShop download. We’ll have more coverage in the future, including a release date.