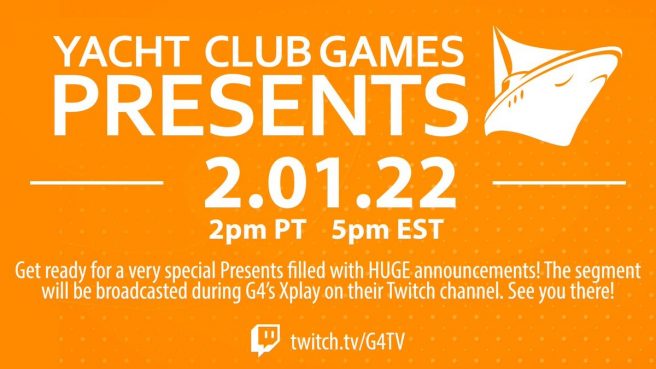 The third Yacht Club Games Presents broadcast will air on February 1, it’s been announced. It will be about 60 minutes long.

The event will feature “a selection of games that have brand new content currently in development”. Further teased by Yacht Club Games, “Sean Velasco, Alec Faulkner, Nick Wozniak, Sandy Gordon, and Celia Schilling will pull back the development curtain to share a boatload of new updates, never-before-seen gameplay sneak peeks, DLC, and a groundbreaking announcement”.

The new Yacht Club Games Presents will air at the following times:

The entire show will be showing as part of G4’s program Xplay, which will be live streamed on Twitch. After the show, Yacht Club will host a Q&A with fans.

“We can’t wait to unleash everything we’ve been cooking up since our last showcase in February 2020. It’s been difficult to keep all this cool stuff a secret! We hope you tune in and get excited too, because this is just the beginning!”

We’ll be sure to bring you any notable news that emerges as it pertains to Switch.