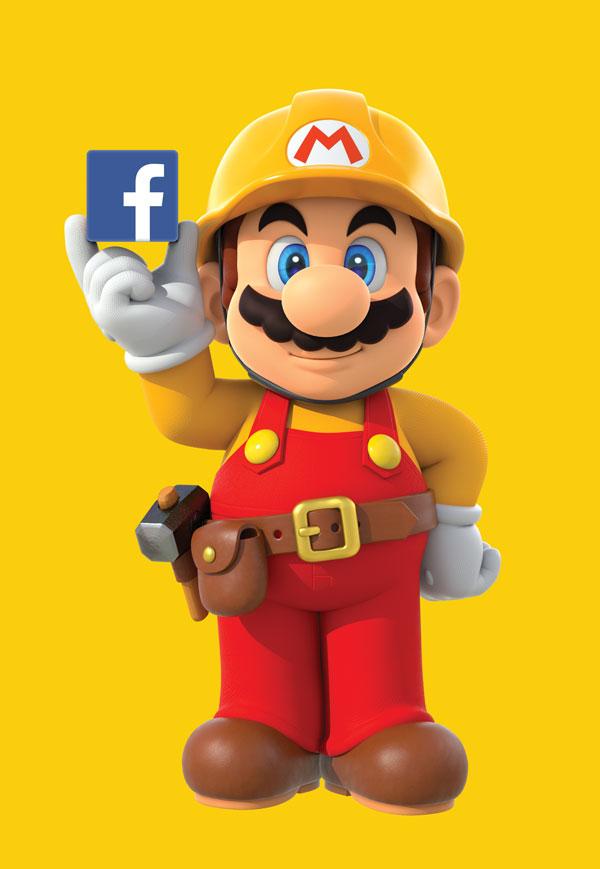 Update 2: Bumped to the top. Full announcement is in:

To celebrate the upcoming launch of the Super Mario Maker game for the Wii U console, Nintendo is hosting a special “hackathon” event at Facebook headquarters in Menlo Park on July 28 and July 29.

Hackathon events are a unique element of the Facebook company culture, and an opportunity for employees to pursue a project outside their day-to-day responsibilities to rapidly create something that interests them. The Super Mario Maker hackathon is exclusively for Facebook employees to design a special level in the game. At the event, participants will be using the demo version of the game that drew rave reviews at the recent E3 video game trade show to create levels using the in-game tools that will become available to a wider audience when the game launches exclusively for Wii U on the 11th of September. The event will culminate with designers presenting their creations to a panel of judges from Nintendo and Facebook. The winning individual or team has the opportunity to make the level available for Super Mario Maker owners to play after the game’s launch. Nintendo will be making a video series documenting the event available for fans to view shortly after the event concludes, and fans can also check in to Nintendo’s social media channels on July 28 and July 29 for live updates.

“Facebook is known for connecting people through delightful shared experiences,” said Scott Moffitt, Nintendo of America’s Executive Vice President of Sales & Marketing. “Video games fit that mission perfectly, and we’re thrilled to work with a partner like Facebook to help more people form connections through the joy of games like Super Mario Maker. It’s easy for anyone to create levels in the game and share them with friends, and we can’t wait to see what the talented Facebook employees will create before the game becomes available to everyone starting on the 11th of September.”

Nintendo is celebrating the launch of Super Mario Maker through a new partnership with Facebook. Employees from the company will be making levels in the game, one of which will be made available to download on release day.

Nintendo is partnering with Facebook to celebrate the launch of #SuperMarioMaker! (1/2) pic.twitter.com/ognvm0aR8c

Facebook employees will design levels in the game, w/ one level available to download for free after launch. (2/2)

Super Mario Maker launches for Wii U on September 11.