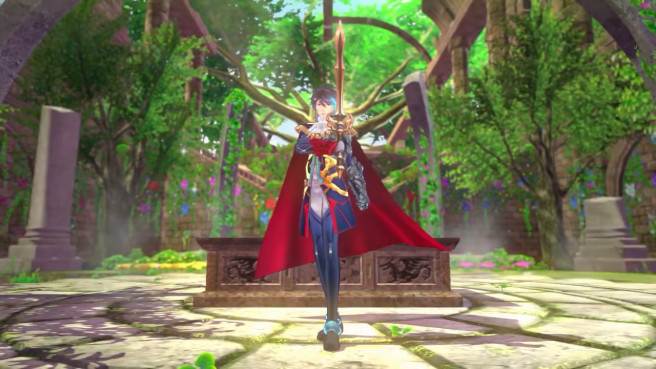 During last week’s Nintendo Direct, more details were shared about the Mirages in Genei Ibun Roku #FE. A summary of the information can be found below courtesy of Serenes Forest.

– Characters acquire skills as they battle with their Mirage
– Skills can be used during battle to cause various effects
– Many of the skills on offer are derived from the Shin Megami Tensei series
– Ex: Sukunda and Bufula
– There are some from Fire Emblem as well, such as Flux +1
– Kiria receives the Tarunda skill from Tharja
– There is a partially filled bar for the next skill Agilao
– Tharja has a “Carnage” called Vajra equipped
– It’s this particular Carnage that seems to be granting the skills
– Players can speak to Tiki to undergo “Carnage Unity” or “Radiant Unity” (or ask her for Unity-related help)
– Carnage Unity uses materials earned from battle and other means to create weapons known as “Carnage” for Mirages to equip
– Each Carnage has its own weaknesses and resistances, Attack rating and set of skills
– It seems once all the skills have been learned, the Carnage is considered “Mastered”
– Ex: Chrom currently has an “Iron Sword” Carnage equipped and it seems he starts with the “Sealed Falchion” Carnage (just like in Awakening)
– If you want to upgrade to the stronger “Épée Rapier” Carnage, you’ll need to hand over 1 Blade Force, 1 Deep Sea Illumination and 2 lots of 1-Star Stardoms
– Mirages can Class Change like in the Fire Emblem games they’re from
– Caeda, Tsubasa’s Mirage, is shown changing class from a Pegasus Knight to a Falcon Knight or Dracoknight using a Master Seal
– Falcon Knights have improved Speed and Resistance
– Dracoknights boast higher Defence and Skill
– Changing classes improves stats and alters the character’s Mirage Attack
– As a Pegasus Knight, Tsubasa has the “Aerial Dance” attack, while she has “Grand Finale” as a Falcon Knight
– Achievements of some form will feature
– After changing class to Falcon Knight, a pop-up appears in the bottom-right corner displaying the “Birth of a Falcon Knight” achievement (“Play Record”)
– After walloping a whole bunch of enemies at once with Grand Finale, the “Performance Beginner” achievement is earned
– From December 1 2015, three songs from Genei Ibun Roku #FE will be released for Wii Karaoke U: “Reincarnation” by Kiria, “Feel” by Tsubasa, “Beastie Game” by Tiki