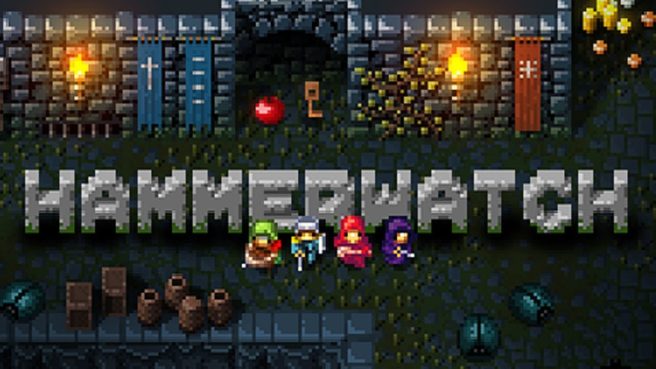 Crackshell and BlitWorks have announced that the acclaimed game Hammerwatch is coming to Switch. It’s due out on December 14 in North America and December 23 in Europe for $9.99 / €9.99.

Hammerwatch is a hack and slash dungeon-crawler that lets you play alone or up to three other players. The new console version will be the first to add some new features, including the new Sorcerer character, a new control scheme for consoles, new character art, and enhanced balance in the skills.

Hammerwatch presents 7 character classes that represent the good old roles of pen and paper dungeon crawlers, the Paladin, shield of their companions, the Wizard, purifying fire DPS, the Ranger, death from distance, the Warlock, electrifying power, the Thief, stealth and mobility, the Priest, the good healer and specially for console first, the Sorcerer, chilling AoE attacks.

More magic for the party: The Sorcerer

The 7th class that will come first on console is the Sorcerer. As you know, the Wizard, the Warlock and the Priest are the magicians in Hammerwatch. Can a fourth spellcaster be different enough? Of course yes, even when the Sorcerer uses ranged ice based spells, aoe attacks, and slows down enemies like other classes, you will be able to launch lots of spells due to his high mana pool, but you’ll have to be cautious because it has low HP.

As the Sorcerer you can shoot ice shards that bounce between enemies, can also summon a comet to hurt and stun and an ice orb to clear larger areas. The passive frost shield allows to preserve your life.

Don’t be fooled by the Sorcerer appearance (you know, hat, tunic and no armor), it’s a powerful magician. Chill your enemies to death, have your combos chain big groups and block enemy attacks freezing them to death with your frost shield.

As a developer you’re always looking for the best product possible, but control schemes are a hard topic, they depend a lot on personal preferences and how you play. Hammerwatch control scheme for consoles has been redesigned by BlitWorks with the community feedback in mind and the technical aspects of each console present. It’s not only a button remapping, with the new dual sticker mode movement and aiming has been simplified and enhanced. Feeling classic? You can opt in the settings.

An usual problem with RPGs is the amount of time you need to invest in order to play them well. Levels, quest log, experience points, ability trees, sidequests… Hammerwatch approach is different, there are no levels, only abilities and different tiers that you buy as you play with the money you crawl. Setting a play with your friends is as easy as sitting in the sofa, selecting the campaign, modifiers and it’s done, just play.

– 6 original classes +1 new class, with unique features and skills
– Character development through unlocks and upgrades
– 3 difficulty levels that you can customize through modifiers
– Local multiplayer COOP, for up to four players
– Campaign (Castle Hammerwatch and Temple of the Sun), Survival and Hero modes
– Dual Stick and classic control scheme