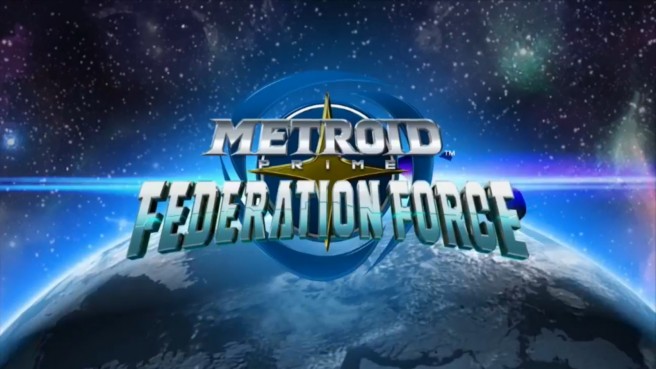 Nintendo of Europe has a new gamepage published for Metroid Prime: Federation Force. On it, there’s a mix of old and new details and screenshots. We’ve rounded it all up below.

– Galaxy is not at peace
– Phazon and the corrupted world has been destroyed
– Phaaze, the Space Pirate threat remains
– Play as a recruit in the Federation Force
– Federation Force: best-of-the-best unit created by the Galactic Federation
– Stamp out the Space Pirate menace
– Suit up in specialized battle armor known as a Mech
– Head out to the desolate Bermuda system to investigate reports of suspicious activity, using your handy blaster
– Eliminate any enemies that get in your way
– Touch down on inhospitable worlds and infiltrate enemy-infested bases
– Solve environmental puzzles and battle fearsome alien life forms of all shapes and sizes in objective-based missions
– Join a squad of up to four players, locally or online, to take the fight to the Space Pirates
– When taking on squad mission, working together is vital to survival
– Divide different types of AUX ammo between comrades before missions
– Use these to support each other mid-mission
– Ex: Repair Capsules can be fired at team-mates to heal them in battle; Slow Beam can be used to hinder an enemy to give the rest of your squad the perfect opportunity to lay down some fire
– Earn MODs after each successful mission
– This can be used to enhance your Mech’s armor and abilities
– Customize your Mech with different paint jobs
– Unlock decals with amiibo
– Blast Ball: futuristic sport that has up to six players split into teams and piloting their own individual Mechs
– Use cannons to blast a large ball into the opposing team’s goal to score points
– Blast Ball supports solo play, Local Play, Download Play, and online multiplayer
– Lock on or use additional weapons with the ZL and ZR buttons on New 3DS; can also aim with the C Stick

– Cosmic Calendar Year 20X6
– Several years have passed since Samus Aran’s heroic actions on planet Phaaze
– The corrupted Aurora Unit 313 was destroyed, Phaaze itself was obliterated, and the creeping threat of Phazon was quelled once and for all
– The mission was considered a huge success by the Galactic Federation, yet a re-emerging enemy means the safety of the galaxy remains in a precarious state
– The Space Pirates are once again proving a constant and unpredictable threat to the Galactic Federation
– They need to be eradicated at all costs if the cosmos is to ever know peace
– The Federation puts Operation Golem into motion: a military campaign with the purpose of developing tactical superiority over this menacing and long-standing opposition
– Operation Golem’s focus is the development of a new type of battle armor known as Mechs
– Mechas are huge, mechanised exoskeletons piloted by a highly adept squadron of marines
– This elite unit is called the Federation Force, and is tasked with keeping the Space Pirates at bay.
– Their directive leads them all around the Bermuda system, from the scorched, scarred surface of Bion, to the harsh, frozen tundra of Excelcion and beyond
– Together, they must get to the bottom of the Space Pirates’ increasingly concerning activity and neutralize the very real threat they pose to civilization throughout the galaxy

– As a member of the Federation Force, you’re considered the cream of the crop within the Galactic Federation
– You’re the first line of assault against the Space Pirates, and only the most dangerous, important tasks fall to you and your squad mates
– Travel to the far reaches of space and thwart the Space Pirates’ plan in Campaign mode
– Embark on co-operative missions for up to four players via Local Play or online multiplayer, working together to fulfil objectives and fend off foes
– Can head out on your own with optional AI Combat Drones as your only backup
– Federation Force soldiers are specially trained to pilot gigantic, robotic battle frames called Mechs
– These metallic behemoths can take plenty of punishment, and come complete with handy gadgets like jet packs, which let you float through the air for a short period of time
– Mechs have multi-purpose, energy-shooting blasters
– These versatile weapons can fire other types of ammunition as well, known as AUX ammo, including destructive Missiles and health-replenishing Repair Capsules
– Can use your blaster’s energy to attach to zip lines, or build up an explosive Charge Shot that can catch tough enemies off-guard or destroy debris that’s blocking your way
– Game lets you aim your blaster with motion controls
– Focus your fire directly on important opponents or objects with lock-on targeting
– If you need even greater accuracy, you can lock on and then fine-tune your targeting with motion controls
– Particularly perilous missions involving data recovery and infiltration also fall within the Federation Force’s remit
– Occasionally, they even have to capture extremely dangerous life forms
– Missions usually involve exploring surroundings and defeating enemies
– You’ll also be tasked with solving puzzles, or asked to venture deep into ancient ruins to recover vital intel
– In other operations, leave the safety of your Mech and sneak through bases undetected, slipping through defence systems and taking cover in places that a Mech couldn’t possibly fit
– Some bosses can be found on certain expeditions
– List of objectives and maps shown on the touch screen
– This shows the positions of both allies and enemies
– Use the maps in combination with a variety of set voice commands, activated by pressing different directions on the +Control Pad, to keep your squad on the same page
– Coordinate with others to open doors, overcome obstacles and cover each other from attacks
– Before each mission, team-mates can choose from a selection of AUX ammo, including offensive weaponry and support items such as enemy-distracting decoys
– Each player can take on a certain role this way
– Be aware of your weight limit, as marines can only carry a certain amount of AUX ammo at a time
– As you use up ammo, replenish your supplies by blowing open crates and other objects
– You can even pick up completely different AUX ammo, changing your loadout while you’re in the field
– MODs: helpful items that boost your Mech’s abilities, including weapon power, armor effectiveness, and more
– Each Mech has a limited number of MOD slot
– There are lots of MODs to choose from
– Freshen up your Mech with a new paint job, or assign your character a new voice
– During debriefing, you’ll be scored based on how quickly you completed the objective, with extra points awarded for accomplishing optional goals
– Get enough points and you’ll earn medals which unlock new paint jobs for your Mech
– Successful manoeuvres might also be rewarded with new MODs
– Any spoils go into one collective pool for the whole squad
– Can visit the Training Deck which has the Shooting Range, Combat Sim
– Shooting Range: go for a top score
– Combat Sim: protect an unmanned Mech from waves of Space Pirate holograms
– Blast Ball also included

– Competitive team sport
– 3-on-3 multiplayer matches
– Pilot Mechs around the arena and shoot the ball using the blaster
– Objective is to score three times in the opposition goal within the five minute time limit
– Up to 6 players locally, with Download Play, and online
– Single-player also supported
– Lock onto the ball to keep track of its location, strafe around it to find the perfect firing position, then refine your aim using motion controls to hit the ball home
– Move about the arena to defend your goal or launch assaults on the opponent’s net, and keep in communication with your team using set voice commands on the +Control Pad
– Fire quick, successive Power Shots to dribble the ball
– Wind up a Charge Shot to send it soaring
– The ball reacts differently depending on where you place your shots
– You’ll get hurt if the ball hits you
– Temporarily out of the game if your health hits zero
– You can blast your opponents directly
– Scoring a goal causes the opposition’s goal to narrow
– Power-ups included
– Use the Shield when you’re under pressure, or get an Adrenaline rush to counter-attack with incredible speed and force
– Grab the Eject power-up to boot rival team members out of their Mechs: when the opposition are on foot, they won’t be able to defend or shoot back for a few seconds
– Empty slots will be filled by computer-controlled Mechs if you can’t find enough players
– Challenge mode: pits you against progressively tougher computer-controlled squads across a series of five matches
– Train freely in the Practice mode until you’re ready to take on the top teams
– Blast Ball profile shows your rating
– It’ll rise and fall as you win and lose games
– Impressive performances will also unlock new paint jobs