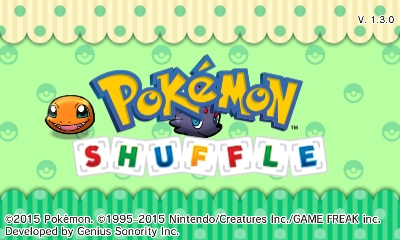 Following maintenance, the 3DS version of Pokémon Shuffle has updated to the new version 1.3. To install the update, you’ll need 720 blocks of free space. The changes are noted below:

– Now has SpotPass, will let you know when the game adds new features and stages
– Gives recommendations for stages
– Will note if you have not played a special stage
– Lists how many available Pokémon you have caught
– Able to fast travel between stages and see how what Pokémon and S Ranks you are missing
– New Survival Mode
— Available after Level 150
— Choose four support Pokémon to use in a series of stages until you lose
— Costs three hearts to play
– New item, “Raise Max Level”
— Get one after updating the game
– Another new item, “Exp. Booster M”, has been added
– Special missions added, called “Mission Cards”
— Give you extra challenges
— Reward with stars that can be redeemed for more powerful items, including select Mega Stones
– Some Pokémon can now be given enhancements

Some of these updates were already present on the mobile version and bring the 3DS version in line with it.