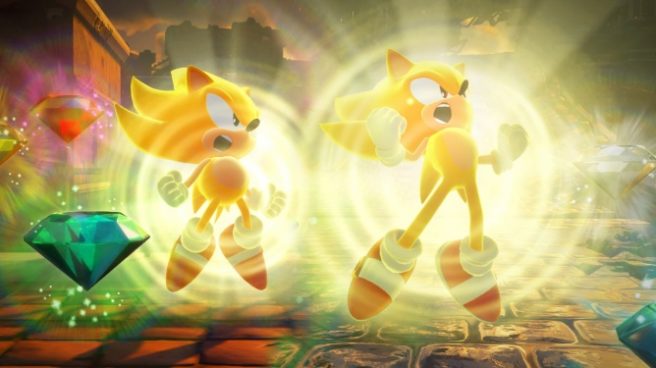 SEGA recently announced that the Super Sonic DLC in Sonic Forces will be made free forever. That wasn’t the original plan, however.

The Super Sonic DLC launched at the end of December for free. After about a month, it was intended to cost $2. SEGA ended up reversing that decision a couple of weeks ago.

During a live stream, Aaron Webber from SEGA’s PR and social media team explained the decision to make the DLC free forever. He stated the following:

“At the end of December, we announced that Super Sonic DLC was going to be arriving in Sonic Forces, and I don’t know if this has ever been officially stated yet, so I actually also wanted to mention this for the record, but Super Sonic was never initially planned to be in Sonic Forces. If you guys have played the game, the Chaos Emeralds aren’t really featured as a primary part of the story, and so Super Sonic wasn’t a thing. Along the development process, they said, ‘well let’s make maybe some DLC for Super Sonic.’

Now, to say that the Super Sonic DLC caused a bit of an uproar I think is pretty fair, and a lot of people going, ‘Hey, you know, this was always free in past games, why isn’t it free here?’ I think maybe some people may have thought too we already built it in the game, and had taken it out like a greedy publisher or something like that… even though that wasn’t the case, we had a lot people that worked really hard behind the scenes over the last month, and thankfully we had the support of pretty much everyone at SEGA, which was awesome, and everyone worked really hard, and it’s kind of like trying to hit a moving target when you’ve already said, ‘here’s the plan, let’s go’, but as of yesterday (January 24), the Super Sonic DLC is free for all platforms. It’s going to be free forever. It’s big news, and really good news I think. We wanted to make sure that the fans don’t hurt at all, so we kind of made the right move on this one, especially because a lot of you guys have seen this stuff in the past and gone, ‘Super Sonic kind of should be a key part of the games, it should be kind of a core part of it.’ So hopefully people are happy with that news, and thanks again to everyone at SEGA. Thank you, could not have done it without everyone’s help there.”

Sonic Forces has other free DLC available as well. These include Episode Shadow and Sanic t-shirts.