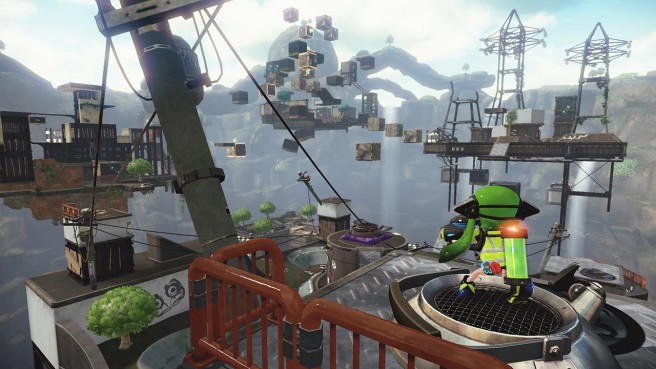 NintendoWorldReport has published a new preview for Splatoon, which contains a bunch of details about the game’s Hero Mode (single-player). You can find the information rounded up below.

– As previously mentioned, you’ll be battling against the evil forces of the Octarians
– Octarians have snatched all of the Zapfish they could find in the area
– Zapfish are needed for electricity
– First few levels are basic
– In these levels, you shoot ink in your humanoid form and then switch to your squid form to move quickly through the level
– The campaign differs in what you need to accomplish
– Outwit various octopi troops
– Levels are made up of small islands that you hop between using launch pads
– Each level has a unique setup that challenges your skills and introduces new elements
– Floating Sponge Garden: has platforming and enemies to fight, but you also shoot ink at sponges to let them grow to huge proportions
– This lets you traverse the stage in brand new ways
– Propeller: when ink is shot at it, the device moves in different directions
– You can raise the propeller far above your enemies and inflict an immediate attack from above if your timing is right
– Timing is another important part of single-player
– “Inkraill Skyscape”: hop on various rails in your squid form and perform timed jumps to land on higher platform
– “Inkvisible Avenues”: platforms are almost impossible to see without ink guiding the way
– Your Inkling can only withstand three splats before you get booted to the overworld
– Checkpoints are scattered throughout levels
– Some levels are apparently very difficult – notably bomb drop levels
– In these, an enemy from above will constantly drop ink tornados around you in an attempt to destroy you
– “Flooder Junkyard”: gigantic robots try to spray the field completely in their color
– When the robots spot you, they’ll come after you with a full assault
– Octostamp boss: gigantic cube that tries to squash you as soon as he sees you
– Climb the sides of his body to start an assault on the tentacle that pops out and free the Zapfish inside
– Octowhirl boss: will fly straight towards you; trap him in a huge pile of ink to nail him down and once again hit the octopus tentacle three times
– One level has you scaling skyscrapers while another is in a galaxy-like setting rife with moving platforms